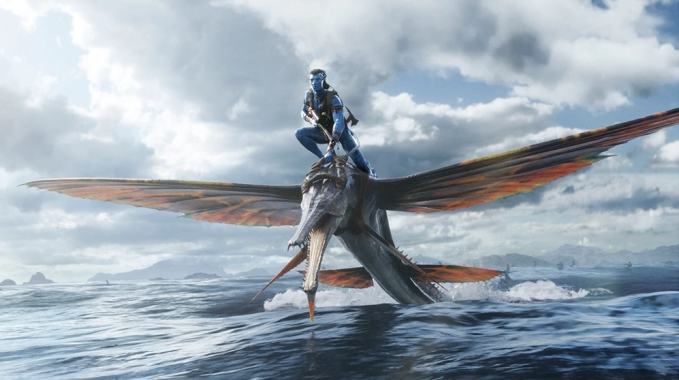 After 13 years of waiting, James Cameron’s sequel to his 2009 box office hit, Avatar is finally out and it was definitely worth the wait. Avatar: The Way of Water follows Jake Sully (Sam Worthington) and Neytiri (Zoe Saldana) a decade after the end of the original movie. In the span of that decade, Jake and Neytiri have 3 children, Neteyam (Jamie Flatters), the oldest, Lo’ak (Britain Dalton), the second son, and Tuktiery “Tuk” (Trinity Bliss), the youngest daughter. They also adopt the child of Dr. Grace Auguestine’s (Sigourney Weaver) Avatar, Kiri (also Weaver), and the human child of Colonel Miles Quaritch (Stephen Lang), Spider (Jack Champion). Avatar, despite being the highest-grossing box office movie, has a mixed legacy because the characters in the original felt very bland, boring, and forgettable. However, Cameron and his team do a great job of really fleshing out each of the main characters in Avatar: The Way of Water to the point where you truly empathize with them and they feel memorable.

Definitely one of the upsides to this movie compared to the original is that it has a lot more emotion to it. You can feel and resonate with every moment of this movie whereas the original was very lifeless in the way that nothing felt developed enough to connect with. It may have been the fact that the original did a lot of building up for the sequel. However, Cameron was able to build up meaningful characters introduced in the sequel, too.

At this point, to say that this movie is visually stunning is like saying the sky is blue. However, that does not make the statement any less true. To be alive and watch this movie in IMAX 3D has to be the greatest cinema experience of my life. All the visuals, the sound design, and the attention to detail is perfect.

This movie is not without its flaws, however. It struggles to expand upon some of the plot points made, like Edie Falco’s character, a General in charge of taking over Pandora to move humans from their dying planet. A major flaw in the original movie is its poor representation of colonialism and while they do still push into it a bit and hint at it happening in the later movie, the sequel focuses on mainly the rivalry between Quaritch and the Sully Family. The film doesn’t provide an angle that is thought provoking, nor is it original at all, but the simplicity of the plot coupled with investable characters makes the experience of watching the movie great. Cameron gets the most credit for creating such a good sequel to a very mediocre original movie that has many flaws.

In the end, nearly every aspect of this movie is brilliantly developed, from the family aspects with both the Sully family and the relationship between Spider and Quaritch, to the incorporation of many genres like romances, the action in the final act, and the brief inclusions of horror spread throughout the film. Its three hour run-time works well with helping it be a very memorable and visually stunning movie.