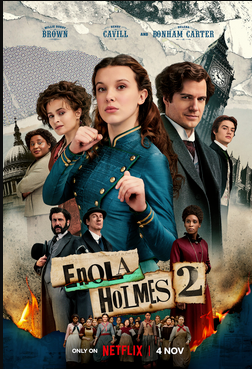 Two years after the first installment was released, Enola Holmes 2 hit viewers’ screens on November 4. A Netflix original series, the first movie followed young Enola, played by Millie Bobby Brown, as she investigated the disappearance of her mother, Eudoria, played by Helena Bonham Carter. Along the way, Enola makes the acquaintance of young Lord Tewksbury, played by Louis Partridge, and becomes closer with famous detective and brother, Sherlock Holmes, played by Henry Cavill. While the first movie focuses on Enola discovering who she is and finding her own path, Enola Holmes 2 is much more of a detective story.

After opening her own detective agency, Enola is tasked with finding a missing girl who worked at a match factory but soon discovers that there is much more to be uncovered than simply the whereabouts of the missing  “matchgirl.” Equipped with her razor-sharp mind, keen observation skills, and the help of Sherlock, Eudoria, and Tewksbury, Enola uncovers deadly secrets that powerful people want to keep hidden.

In addition to developing the mystery, Enola Holmes 2 incorporates into its storyline the history of the Matchgirls’ Strike of 1888 when women sought to improve their working conditions in the match factory. Staying true to themes from the first movie, Enola Holmes 2 portrays stories of women trying to find their ways in a male-dominated society and their desire to be treated equally.

Though always interested in the mysteries Enola solves and the scrapes she gets herself into in the process, one thing fans were demanding of Enola Holmes 2 is the continuation of the budding love story between Enola and Tewksbury. Though Tewksbury made it quite obvious at times in both movies that he had feelings for Enola, both characters were somewhat hesitant to make a move due to Enola’s desire to remain independent. However, Enola Holmes 2 shows immense character growth in the two teenagers that satisfies the tension, development, and resolution of their love story.

Quirky, mysterious, and humorous, Enola Holmes 2 conveys inspirational messages for women. Its connections to the original Sherlock Holmes detective stories also draws in those who grew up with The Adventures of Sherlock Holmes by Sir Arthur Conan Doyle.