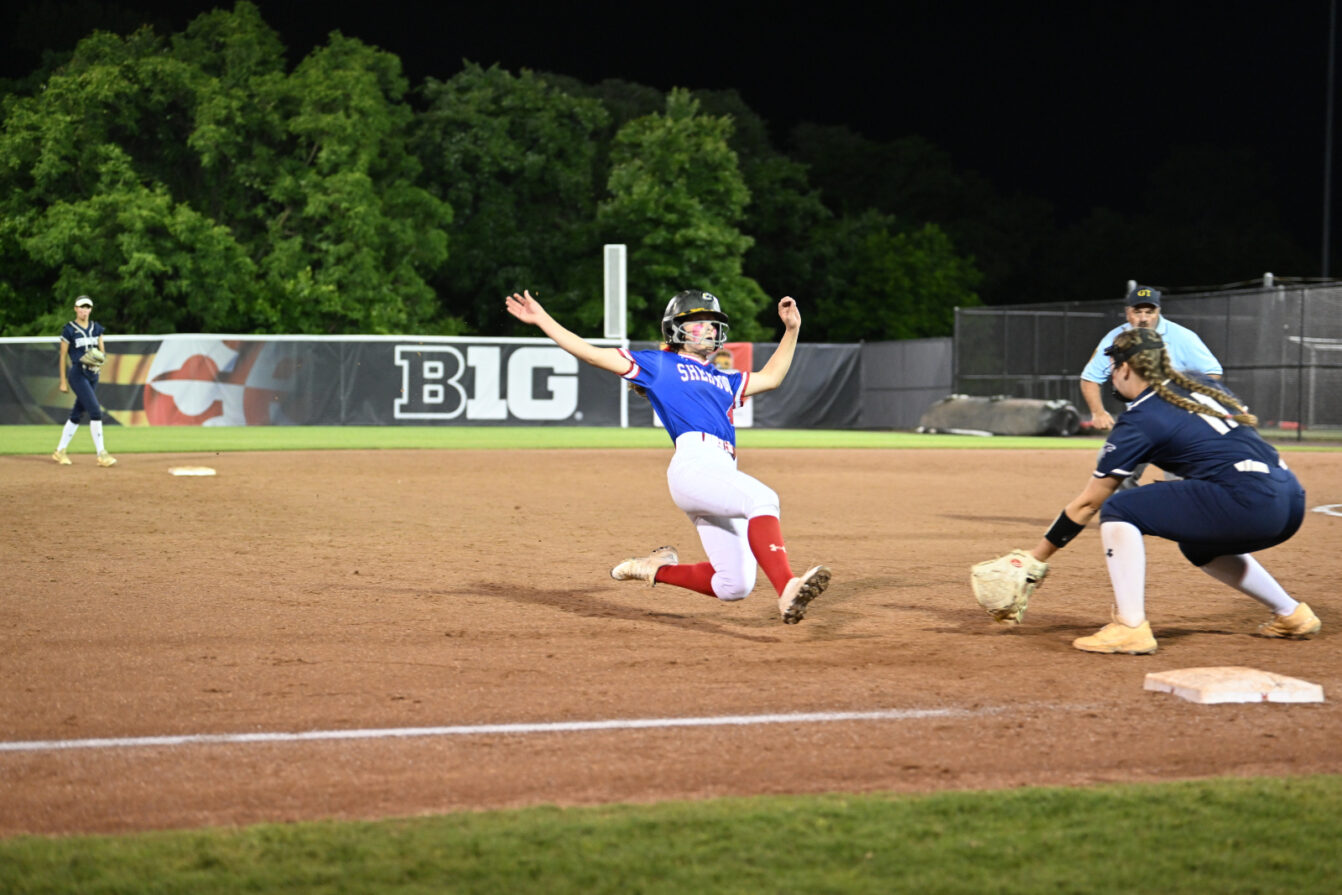 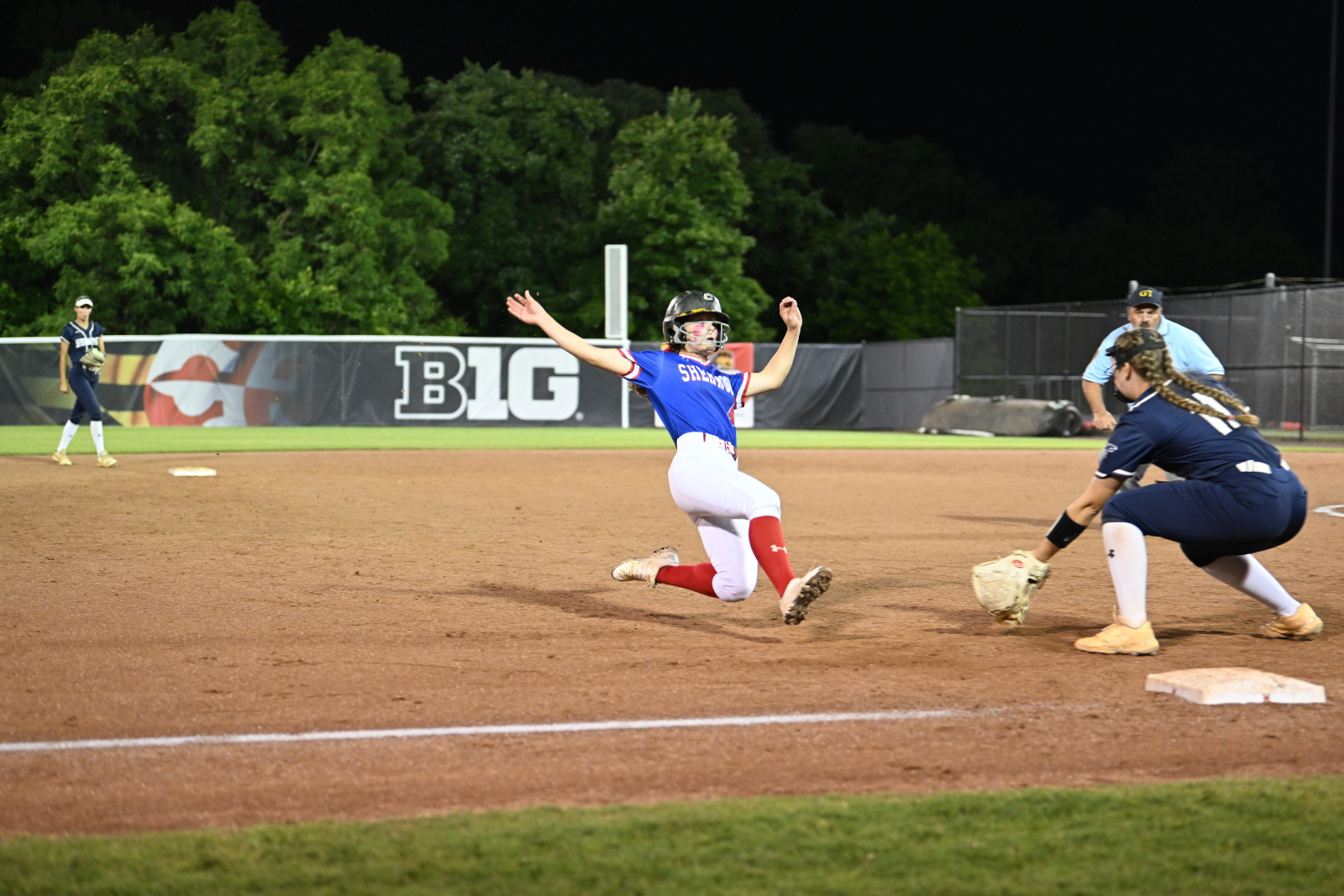 Freshman Kiera Schlutz safely slides into 3rd base for a triple in the championship game vs. Severna Park. Photo by Sherwood Athletics

Late into the evening after many delays at the Maryland softball tournament, Sherwood beat Severna Park 21-5, securing their 7th state championship title in the last 10 years and their fifth one since Ashley Barber-Strunk became the head coach. The Warriors got off to a torrid start and scored 13 runs in the first inning to cruise toward a five-inning, mercy-rule victory.

The scoring started with a double by senior Summer Green that scored three runs. The lead kept growing in a 14-hit inning that also included triples by senior Kay Sakala and junior Hannah Friend. In the fifth inning, the Warriors had one more out to go and then they would be named state champions, but the lights in the stadium went off, postponing the game for 30 minutes. When the game resumed, Severna hit right to second base where junior Ally Long fielded the ball and threw to Sakala at first base. The long wait was over–Sherwood was 4A softball champions.
“We all ran into the middle of the field and gave each other hugs and even some tears were coming from some of our eyes,” said Sakala. “We had worked so hard all season to reach this goal and the goal was achieved.”

Before the Warriors made it to the state finals they faced Churchill in the state quarterfinals and got a mercy-rule victory by beating the Bulldogs 19-0 in five innings. The team’s closest game of the playoff was against reigning state champ Catonsville, who won the 4A state title last spring after the Warriors fell to North County in the state semifinal game. Sherwood wasn’t to be denied this year and won 5-0. Junior Kat Hanson threw a two-hitter for the shutout.

“I knew [Catonsville] was a good hitting team so I made sure I was on point with all my spots and using all my advantages against the batters,” said Hanson. “There’s no better feeling than when it’s an important game, everyone’s watching you, and you strike out somebody.”

Although the Warriors entered the season as perennial favorites to compete for a state title, the season was not without hiccups. The team lost 8-7 in early May to Churchill, and they later faced strong pitching in a 11-4 loss to Damascus. As a result, the Warriors as a No. 3 seed did not compete for the county championship. However, the two losses in the regular season only focused the players on their primary goal of winning a 4A state title, as well as giving them time off before they entered playoffs that were only a few days away.

“Missing the opportunity to play in the county final this year did not really deter the mindset for this season which was to win states,” said junior left fielder Julia Peffer. “[Losing to Damascus] was also a huge driving factor going into playoffs because we wanted to prove that a regular season loss doesn’t affect how a team performs in the playoffs.”

Hanson and junior center fielder Brenya Schlutz, alwere named All County. Just as Sherwood utilized young talent when it won its last state title in 2019, this season freshman right fielder Kiera Schlutz increasingly contributed to the team. She went 3-3 in the state championship, hitting 2 triples and bunting for a single.

“Starting and playing in the state final game as a freshman was such a fun experience. I never expected to start, especially because I struggled at the beginning of the season but stepping on that field was one of the best feelings ever,” said Schultz. “Our drive to win this season was so great and played a big role in winning the state championship. Throughout the season we kept the same work ethic and every practice we gave it our all, which needs to continue into next year so we can win another state championship!”