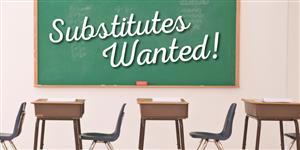 Many students and teachers were surprised and pleased when the MCPS Board of Education voted to close schools one day early for the Thanksgiving holiday. However, it was only a small indicator of a much larger problem. MCPS is experiencing an extreme shortage of substitutes, with hundreds of open positions, forcing teachers to take on the burden for their absent coworkers. The situation has become increasingly dire as infections skyrocket from the omicron variant.

Via Facebook, one anonymous substitute shared that on the week of January 3., directly after the winter break, there were over 400 middle and high school requests for subs in MCPS, with more than double that for elementary schools, meaning that more than 1,000 teachers are absent.

At Sherwood in the prior week alone before the Thanksgiving holiday and at a time when the world did not even know about the omicron variant, 45 teachers were absent on one or more days, school secretary Caitlin Ring said, and of those 45, 17 did not have subs, meaning that other teachers had to cover those gaps.

Full-time high school teachers teach five periods a day, with two periods allotted to them for planning and grading. However, science teacher Glenn Miller, who is an at-large director for the Montgomery County Education Association (MCEA), explains that MCPS can legally ask teachers to give up one of those planning periods in order to cover a class for a missing teacher in lieu of a sub.

“Any time that is taken away from planning and grading, to cover classes, it cuts into the time that we have for students, makes us less available. If we don’t have that time, then we don’t have the ability to support the students like we should,” Miller said.

The lack of substitutes can be attributed to Covid-19–but not in the way most would expect. Anatomy teacher Janet Frensilli explained that MCPS regulations mandate that in order for a substitute teacher to remain as part of the ‘system’ (available to teach), they are required to cover at least four days a year. However, since all learning was virtual in 2020, the need for subs was negligible, yet MCPS did not remove the requirement, meaning that an enormous number of subs were removed from the system and then sought employment in other counties.

So far, MCPS has not been forthcoming either about the plan to supplement the insufficient number of substitutes currently in the system. In a press conference Tuesday, January 4, Interim District Superintendent Monifa McKnight emphasized the need to continue in-person learning, but did not answer any questions beyond what has already been stated, that “MCPS was making an effort to continue in-person instruction with no interruptions.” McKnight ignored the questions pertaining to either the specifics for MCPS’ plan to hire more subs or which schools needed to be closed.

“Sherwood has handled this very well,” Frensilli said. “The lack of teachers causes problems … but the administration is doing the best they can. Teachers aren’t being asked to cover classes out of their departments and the distribution of coverage requests is even … [I]t isn’t an ideal situation, but things will get better. It will take time.”