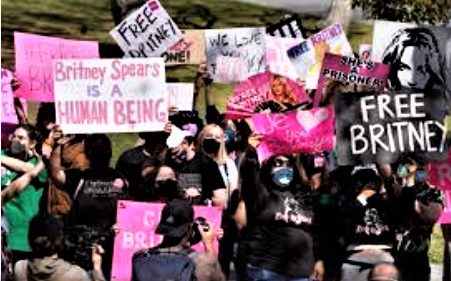 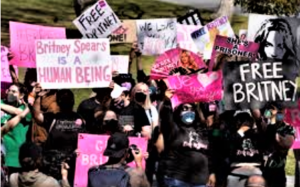 The “Free Britney” movement has existed for over a decade but only reached mainstream popularity in the last few years as more details surfaced about the conservatorship governing the life of 39-year-old pop singer Britney Spears. A conservatorship is a legal arrangement that appoints a conservator, sometimes called a “guardian,” to manage the money or daily life of a person who a court rules as gravely disabled in a way that renders them unable to manage their own affairs or make reasonable personal decisions. Spears was entered into a temporary conservatorship in 2008, which was later extended to an indefinite arrangement, after being hospitalized for a mental breakdown. On November 12, a judge finally ruled in favor of terminating the conservatorship after 13 years, a lengthy legal battle, and years of campaigning by fans and activists alike.

The fact that Spears’ conservatorship was able to continue for so long despite public outrage over the conditions she was living under reveals serious and urgent issues with the system at large. Spears testified over several court sessions that she had been denied the right to remove a contraceptive device, made to perform and tour despite not having access to the profits from her work, and forced to take Lithium (a medication for mood and psychotic disorders) after vetoing a dance move. How is it that a woman with millions of dollars and millions of fans behind her could be trapped in such a horrible situation for over a decade? Spears’ case highlights the primary issue with conservatorships: they can be nearly impossible to get out of, and paradoxically, the stricter the arrangement the harder it can be for conservatees to advocate for themselves.

Although Spears has been freed, 1.3 million Americans still live under conservatorships, and the vast majority of these people have significantly less resources available to them and less support behind them. “Guardians” in a conservatorship have the legal right to deny or mandate medicine and medical treatments. They can set curfews, deny access to the internet and social media, completely control finances, and even forbid outside contact to the conservatee. Disabled individuals can also be denied access to necessary devices like wheelchairs, walkers, and speech devices, which further undermines their ability to argue for themselves, communicate dissatisfaction with their circumstances, and advocate for their freedom.

Although these laws exist with the intention to aid and protect individuals that need intense daily care, it’s clearly very easy for these arrangements to be abused or develop into something harmful. “Conservatorship is not necessary to deliver high quality medical care. Conservatorship is not even helpful. This is true, even for people with the most complex disabilities … Conservatorships do not make people safer or prevent abuse,” testified Dr. Clarissa Kripke, Clinical Professor of Family and Community Medicine at the University of California San Francisco, in a senate judiciary hearing discussing harmful conservatorships. The current conservatorship system is functionally ableist, or discriminatory against disabled individuals, even in cases where intentions are good. It fundamentally undermines the autonomy of disabled and mentally ill people, and these issues are worsened as subconscious ableism and stigma can cause courts to rule in favor of unnecessary conservatorships or extend arrangements even after they are no longer necessary. Conservatorships can be debilitating, traumatizing, and humiliating for their subjects. Giving a singular person as much power or more over another adult person as parents have over a small child is simply not a safe way to structure care.

Before Spears’ highly publicized case, many people had likely never even heard of a conservatorship before, let alone known how they function. The Free Britney movement has created an important opportunity to bring attention to the harm conservatorships can cause, and many disability activists are hoping that those who supported the movement will turn that energy towards advocating for conservatorship reform. The most urgent concern is making sure there is a way out of these arrangements for conservatees, because when someone’s communication is limited the way it can be under a conservatorship they can easily be trapped in abusive and controlling situations. Anyone who has rightfully shown outrage towards the details of Spears’ agreement should remember the many Americans living under the same conditions, and continue advocating for freedom and safety for those who have no one to speak up for them.