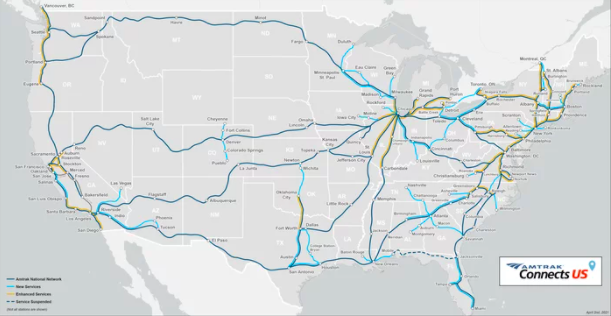 In his plan, Biden dedicated $85 billion to improving public transit such as commuter railways and buses, and $80 billion to upgrade the freight and passenger rail system; for Amtrak, the changes could be monumental. “Imagine what we can do, what’s within our reach, when we modernize those highways. You and your family could travel coast to coast without a single tank of gas onboard a high-speed train,” said Biden at his March 31 speech in Pittsburgh.

Following Biden’s proposal, Amtrak officials immediately expressed their excitement about what the proposal could mean for rail travel and released the “Connect US” plan for expanding and improving their railways. By 2035 with Biden’s funding, Amtrak hopes to create about 30 new routes, upgrade 20 established routes and transport 52 million people, 20 million more than in 2019.

Following the explanation of their “2035 Vision,” Amtrak composed a map depicting how they envision their rail network looking in the future. In this map there are new routes linking cities formerly lacking Amtrak connection, such as Las Vegas and Phoenix, cities left detached for years. Amtrak plans to focus on expanding their system in regions throughout the nation, including in Midwestern cities such as Cincinnati and Cleveland as well as cities in the Southeast such as Montgomery, Alabama, Nashville, and Louisville.

The East Coast will also receive an upgrade, as Amtrak plans to connect areas of New Jersey, Pennsylvania, Georgia, and the Carolinas. In Maryland specifically, the lines between Baltimore, Philadelphia, and D.C. will be enhanced, allowing for more efficient commutes between the cities.

Following the implementation of this plan, Amtrak predicts Americans will not only see improved connections, but also major environmental benefits. Amtrak promises traveling via high speed rail lowers carbon emissions, assisting in the ongoing battle against Earth’s greatest modern environmental issue. According to their proposal, “Traveling on Amtrak is up to 83% more energy efficient than driving and up to 73% more energy efficient than flying.”

Amtrak’s improvements may also help alleviate America’s traffic congestion. As the population of the U.S. grows and more people migrate to urban areas, traffic piles up, with many enduring hour-long commutes into cities. Amtrak explains that most Americans spend up to 80 hours in traffic annually, making alternate modes of transportation, such as high speed rail systems, necessary. With the new improvements to Amtrak’s rail system, the company hopes Americans will turn to train travel for quicker commutes.

Recreational trips can also be improved through Amtrak’s future expansions, as people will be able to casually visit more cities than in the past. Amtrak provides a less expensive and easier transportation option for people, as it eliminates the complications involved in traveling via airplane and the hassle of parking when driving.