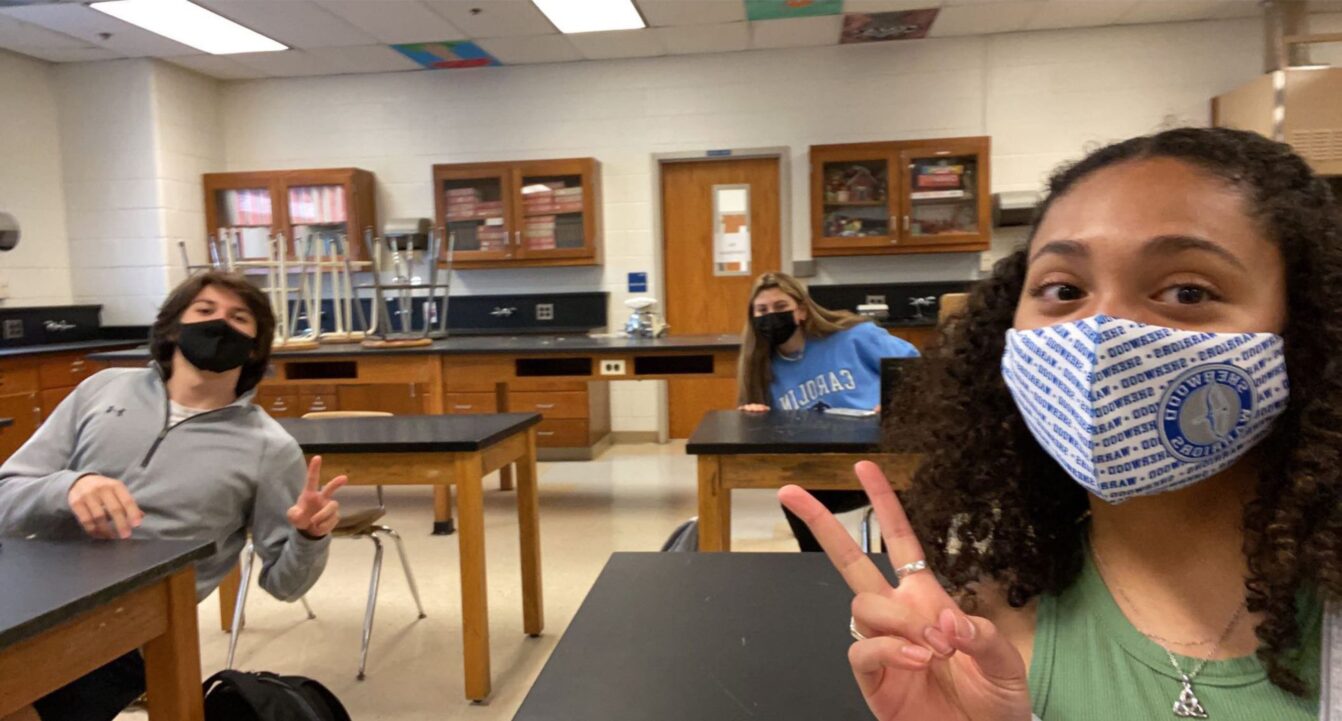 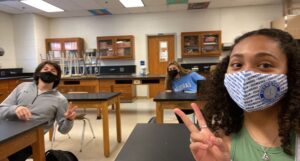 After over a year of virtual instruction, Sherwood students have finally returned to the building–in very limited numbers. Students who opted for in-person learning have been attending school on a biweekly rotation in order to limit the number of people in the building at once. However, because of the low student turnout, starting Monday, May 10, those who have been coming in-person have been invited to come for both rotations.

Of the 800 or so students who selected to return to Sherwood, about 40 percent have not attended any in-person classes, according to Principal Timothy Britton. Based on these numbers, the school has invited students from the waitlist, many of whom have chosen to remain virtual. The lack of students in the building equates to small class sizes, with many classes having just two or three students each.

Junior George Karadimov has benefited from the small classes, as they minimize distractions and allow him to focus. “In a room with only a few students, the teacher can work more directly with you and help clarify topics that have been challenging for you,” Karadimov said. “In-person classes somewhat force you to re-develop an organized regimen of sorts — something I personally find useful as it allows me to get back in the swing of things and capitalize on the time I have.”

Starting May 10, in-person classes will have slightly more students, while still remaining a small fraction of the size they normally are. Compared to the usual hustle and bustle of the Sherwood hallways, junior James Lyons describes the school as “very quiet [with] no one really socializing in the hallways. It’s a very dull atmosphere compared to last year.”

Most peer interaction takes place during the lunch block, where students can finally hang out with their friends–a selling point for returning to in-person school. “[It’s] definitely the best part of my day,” sophomore Anna Hendery said. However, in order to limit the number of students taking off their masks to eat at one time, the 70-minute lunch period initially was split into two blocks. Half of the students ate a socially distanced lunch in the cafeteria or outside, and the other half went to assigned classrooms for a study hall. After a half hour, these groups switched.

Junior Ariana Welch was disappointed with this lunch and study hall arrangement. “The study hall period is too short to make a real dent in my workload for the day, and I feel as though I’m missing out on time I could spend outside eating and talking to my friends,” Welch said. “Those who are virtual have the entire lunch off, so why should I be counted absent for wanting to finally get the social interaction my life has been lacking all year?”

Despite her frustration with the lunch schedule, Welch overall is pleased that she’s back in Sherwood. “I do believe we made the right decision to come back to school,” Welch said. “I wake up each morning excited to get ready and go to school.”

Based upon the number of students who have returned to the building, administration decided after a month of in-person school to remove the mandatory study hall. All students now have the full 70-minute block to eat lunch, either in the cafeteria, auxiliary gym, or outside. Study hall periods are optional for any students who would like a quiet place to complete work.

For students including junior Lily Buffington, this change is welcome, as many of her friends who have returned to school have been in the opposite lunch block. “At that point during the school day I want a break,” Buffington said. “What I don’t want is to have to sit in another classroom for 35 minutes.”

Another change to Sherwood policy beginning May 10 is to the one-way hallway system. Initially, when administration anticipated larger numbers of students returning to school, one-way hallways ensured that social distancing could be maintained. However, many students–freshman and seniors alike–found this one-way hallway system to be unnecessary and confusing, as students would have to take long routes to avoid empty hallways.

Freshman Mia Prudenti, who came to school to “get a feel for the building and meet new people,” finds herself lost and confused with the one-way hallway system, having this be her first experience attending school at Sherwood. Senior Carly Herman said the one-way rules can leave even seniors “looking clueless” in the hallways.

Based on the actual numbers of students who returned to the building, as well as a lack of enforcement of the policy, administration has acknowledged that the one-way hallways are inefficient and will be making changes accordingly. “I think that’s the key thing with the whole Covid year, just to recognize when something is necessary or not necessary and make the adjustment,” said social studies teacher Michelle Games.

“I’m used to packing into the hallway like sardines trying to get from one class to another, and now it feels a bit like a ghost town, which definitely took some time getting used to,” noted senior Alyssa Feinbaum. The changes to allow students to come to school every week and to move more freely around the building might help the experience this spring feel a little closer to normal for Feinbaum and the other students who decided to give in-person a try.