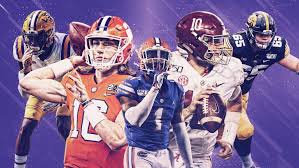 Following Tampa Bay Buccaneers and Tom Brady’s dominating 7th Super Bowl win over the Kansas City Chiefs and an highly eventful free agency period, the final stage of the offseason is upon us. The NFL draft is the most influential event for every franchise. You can make a pick that elevates your franchise into Super Bowl contenders for the foreseeable future, like Patrick Mahomes to KC in 2017, or you can buckle your odds at postseason contention for years, like Mitch Trubisky to the Bears in the same draft class as Mahomes. Without further ado, let’s mock who will help their February football dreams and who puts their success in jeopardy.

Jacksonville lands arguably the best QB prospect since Andrew Luck in 2012. With a new culture coming to Duval with Urban Meyer coming out of retirement to coach the Jags, this pick alone makes Jacksonville watchable for the next few years. There are a lot of holes left to fill on the roster, but don’t be surprised to see Jacksonville in division title contention in a weak AFC South.

Like Baker Mayfield and Joe Burrow of previous drafts, Wilson wasn’t near the top of any draft board before this college season. The hype surrounding Wilson along with the excitement of new head coach Robert Salah has fans thinking the franchise is finally turning around. However, this pick feels incredibly risky and is more likely to land the Jets right back in the top 5 of next year’s draft rather than in competition for the playoffs.

Mac Jones or Justin Fields? It’s been up for debate for weeks and all reports indicate the Niners are leaning towards Jones. It’s important to note that this time of year produces the most smokescreen reports and Fields is clearly the better prospect. The 49ers have a Super Bowl ready roster and allowing Fields to sit and learn behind Jimmy Garappolo not only allows San Francisco to be competitive as early as this season, but for the next 5 years when eventually the Niners transition on from Garoppolo.

The best non-QB prospect in the draft crosses over the state line from where he played college ball. Pitts is more than just a prototypical tight end. He has the frame built for the position with the speed and receiving skills of a wide receiver. Atlanta could go QB and start the rebuild, but with the best offensive weapon being added alongside Julio Jones and Calvin Ridley, the Falcons would have a top tier offense that instantly puts them back into playoff contention for as long as Matt Ryan sticks around.

How can you best surround your franchise quarterback? Keep him standing long enough to make plays. Joe Burrow has already suffered one major injury and is one away from being injury prone. Sewell is a surefire 10 year pro and would help solidify a weak o-line. The Bengals don’t become playoff contenders overnight but the future is much brighter with Sewell holding down the blindside.

Miami just keeps winning. After trading out of the 3rd pick and back into the 6th pick, the Dolphins can add the best wide receiver in the draft. Adding Chase gives Tua Tagovailoa every opportunity to take this Super Bowl ready roster into the postseason. If Tua doesn’t work out, the receiving duo of DeVante Parker and Ja’Marr Chase will still wreak havoc for years to come.

Detroit needs a lot of help, and a receiver could fill a bigger hole here, but the smart move is to take the best defender in the draft at 7. Parsons instantly becomes the leader of the defense and starts the rebuild right. The Lions won’t be in the playoffs this upcoming season and maybe not even the year after that, but Parsons raises the ceiling of the team more than a receiver could.

After spending each and every pick on the defense last draft and making a move to add QB Sam Darnold, the Panthers are in prime position to address the biggest flaw on the team, the o-line. Carolina’s offensive weapons are miles better than Darnold ever had with the Jets and adding arguably the best offensive lineman to the roster should keep Carolina in the playoff hunt for a few years.

Denver has been searching for their long term QB for what feels like forever. While QB Trey Lance has more potential, Jones is more NFL ready today. The Broncos don’t want to sit a year and wait to develop a guy like Lance. Drew Lock is on the hot seat and Jones could come in as soon as halfway through the year. Stability at the QB position and the return of LBs Von Miller and Bradley Chubb makes Denver an extremely competitive team for the near future.

While Jerry Jones loves offense, this defense and more specifically the secondary is in desperate need of a lockdown corner. Everyone knows about the offense in Dallas, but scoring 40 means nothing if you give up 41 a game. Adding a corner like Surtain makes the defense not horrific and in the NFC East, you don’t need to be elite on both sides of the ball to take home the division.