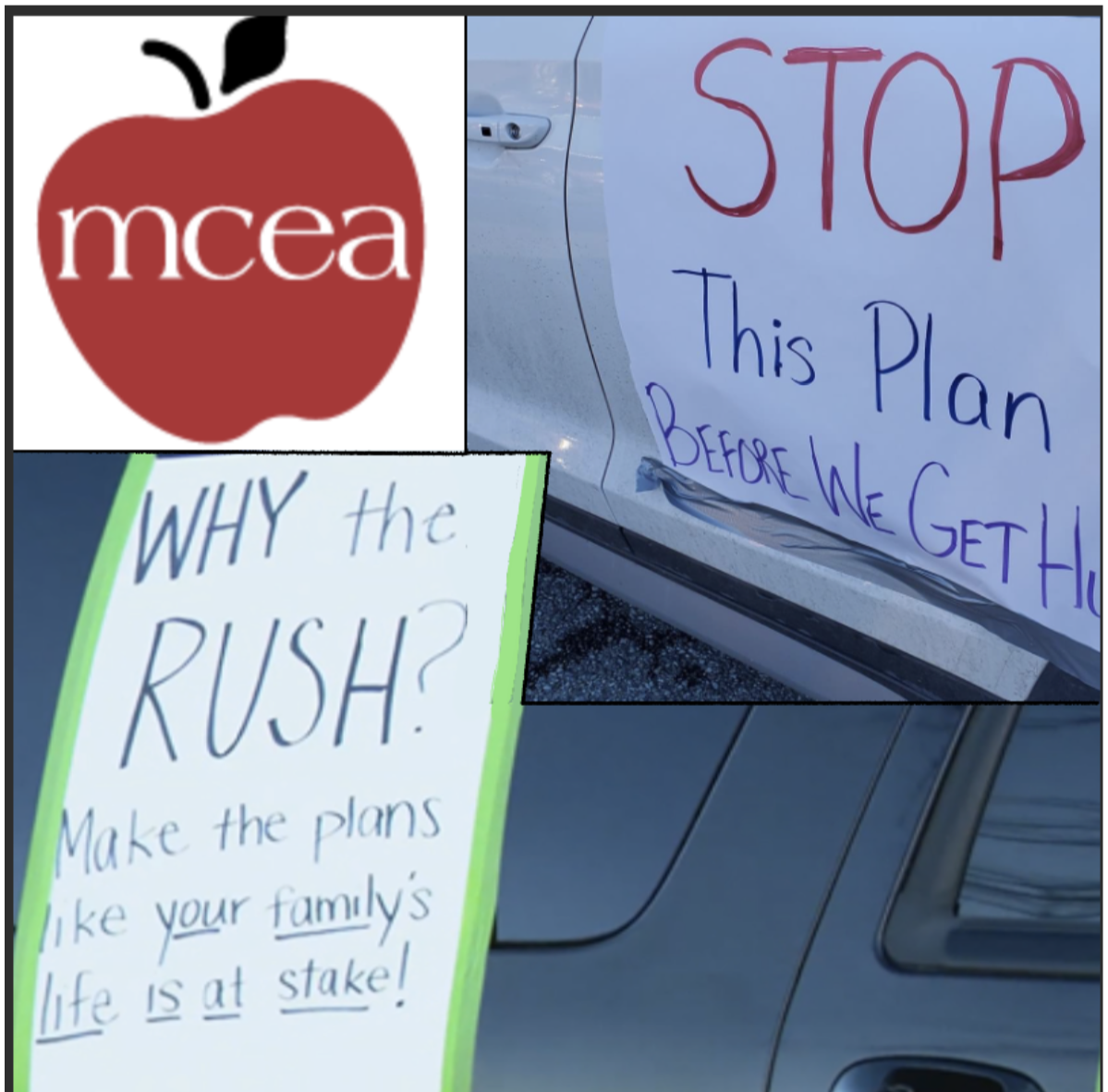 Yesterday evening, as the MCPS Board of Education convened for a business meeting, more than 400 MCPS teachers, parents, and students formed an enormous car picket parade, driving by the building to protest reopening schools under what they state are unsafe conditions. Organized online, the Montgomery County Education Association (MCEA) sent out an email newsletter urging parents and teachers to attend the in-person picket. About a thousand participants also logged into an online Zoom meeting/ Facebook Live to hear  speeches and see live footage of the picket parade.

After the Board of Education approved plans to begin in-person instruction in March, some teachers are standing up in protest for what they believe are unfair and unsafe return expectations. Only 4,000 vaccinations have been made available through MCPS for over 13,000 teachers, and the supply was almost completely depleted last week. Despite this, MCPS has chosen to go ahead with the reopening plan–a plan that many teachers and parents have criticized on Twitter as ‘slapped together’ and ‘not viable.’ MCEA hopes to combat this by insisting that before a major return occurs, more thorough testing and tracing protocols will be put in place, and ideally, 100 percent of in-person teachers fully vaccinated.

Martin Bergoffen, a physics teacher at Wheaton, was one of the in-person picketers. “All teachers need to be vaccinated before the return,” Bergoffen said, adding, “Students deserve an equal opportunity to learn, but safety should always come first.”

Though some interviewees were willing to share their name, others declined out of concern for their job security.  “MCPS needs to be considering the safety of students and staff first before dollar bills or anything else,” said one teacher who didn’t give their name. “Teachers want to–we want to go back, but we want to go back safe. I won’t go back knowing I could endanger my family, my friends.”

As well as the picket, attendees also gave speeches. “When the pandemic started, teachers were praised and honored … now, they are being villainized for trying to keep their communities safe,” Jeremy Levine, a longtime MCPS resident, retired teacher, and parent, told the audience.

Transmission rates in schools have proven to be low, but data gathered suggests that although young children are much less likely to catch Covid-19, (and if it is caught, it manifests as a mild cold) 1 in 4 teachers have preexisting conditions, not including age, that will make contracting Covid-19 a more serious health risk. Also, the research conducted suggested that children are unlikely to contract or spread the coronavirus — an idea that influenced school reopenings in some communities.  But Laura Garabedian, a professor of population medicine at Harvard Medical School, indicated that the data on transmission rates at schools may have been skewed, as testing wasn’t being done on those with mild or symptomless cases. MCPS has already placed an emphasis on safety, noting in their return info newsletter that “MCPS has spent more than $15 million to purchase Personal Protective Equipment (masks, sanitizer, gloves, etc.) and make significant improvements to HVAC and safety systems.”

Despite the fact that MCEA and MCPS are slowly reaching an agreement on a return-to-school compromise for all, MCEA remains critical. “[We] still feel [that] MCPS’s current reopening plan is short-sighted and does not prioritize student and staff health and safety.” A public statement released by the union called the school board’s unanimous vote to begin reopening schools on March 1 “irresponsible,” calling it “the latest offense in a bungled effort to return students to school buildings … The current MCPS plan requires more space, more people, and more resources than are now available to successfully implement this planned reopening of school facilities.”

Though MCPS has assured unions and teachers that a return will be safe and social-distanced, many teachers still fear for their health. “We are insulted that it was assumed that we should just suck it up and obey the delusional, dangerous directives,” MCEA vice president Jennifer Martin said in her speech at the picket.