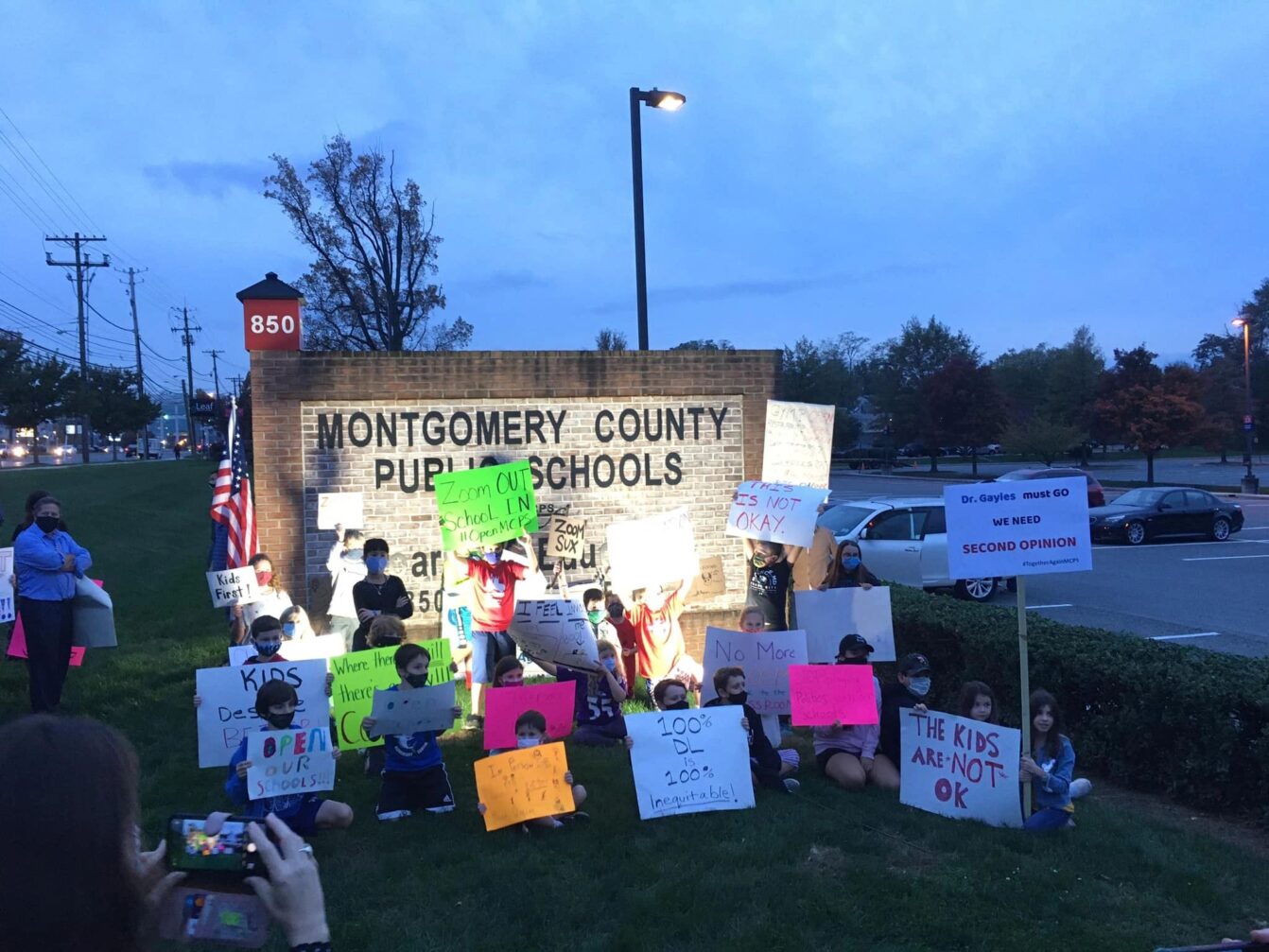 The MCPS Board of Education voted unanimously to return students to in-person learning, beginning with special populations of students as early as March 1. During the live-streamed Board meeting on February 9, a number of parents spoke in favor of  reopening schools. For the past few months, many parents have been increasingly vocal on Facebook and other social media platforms about their criticism of MCPS for delaying the reopening of schools.

A parent Facebook group in favor of opening schools, Together Again MCPS, has vocalized their desire to see their children back in school through daily posts, letters, petitions, and yard/street signage. One such petition has accumulated more than  2,000 signatures to get schools to reopen. “In-person schooling is essential for academics, social development, physical health, and mental health,” wrote one parent member of the Facebook group. During the Board meeting, many parents in favor of reopening schools came forward to share their testimonies. Parents urged the BOE to consider how keeping schools closed has impacted students’ ability to learn. “It is the circumstances at home that are now the greatest influence of whether a student can engage in school,” said MCPS parent Mellisa Mckenna in testimony to the Board.

Dawn Marie Iannaco-Hahn, a mother of a special needs child, expressed her disappointment in MCPS in meeting the needs of children with special needs during virtual learning. “We moved to a private school [for one of her children] because MCPS was failing to meet his IEP needs,” said Iannaco-Hahn, who was one of the many parents who urged the BOE to stop making “excuses” as to why schools should remain closed. “We have heard more excuses and seen more teachers refuse to go back to in person teaching, even those who have already been vaccinated,” added Iannaco-Hahn.

In January, the BOE altered its health metrics to make it easier for a return to in-person instruction. Under the new metrics, instruction in school buildings could begin if the average 14-day case rate was 15 per 100,000 people or lower. Currently, COVID-19 cases and test positivity are trending downwards, with the case rate at 18.2 and the test positivity rate at 4.3 percent as of February 15. The BOE has indicated that in-person instruction will begin even if the county does not meet its own revised health metrics.  The Centers of Disease Control and Prevention (CDC) recently revised guidelines for a return to in-person instruction, including the recommendation that such a return can occur even if teachers are not vaccinated.

According to the Bethesda Magazine, 60 percent of MCPS students opted for all-virtual school in the survey that went out in December, meaning that nearly 100,000 students in the county will not be returning to school buildings this academic year. A disproportionate percentage of those opting-out of returning are minority students and their families.

Students who choose to return to school will be divided into two groups, and one group will be in person four days a week while the other attends virtually in an A/B group rotation. At various times students at school may have to continue virtual lessons on the Chromebook while being supervised by a classroom monitor. However, many parents who were in support of opening schools have now raised concerns regarding the plan of having classroom monitors. “Time an energy and money should be spent on getting teachers the tools and technology they need to do their jobs in the classroom both far and near,” said parent Betty Clark in her testimony to the Board. Parents argued that having students continue with virtual learning in a classroom, even if it is for part of the day, is pointless and defeats the purpose of sending students back to school. “This babysitter model is completely unacceptable,” added parent June Traicoff in her comments to the Board.

Although many parents are adamant on getting their children back in school, a number of parents are opposed to having schools re-open. Parent Bridgid Meyer urged the BOE at the Feb. 9 meeting to consider how reopening schools would negatively impact minority students and their families. “We know that COVID-19 affects families of color far more than the rest of the population. They are far more susceptible to illness,” said Meyer. The zip codes that were impacted the most by COVID-19 were communities with the greatest diversity. MCPS parent, spouse to an MCPS teacher, and veteran of MCPS, Peter Perry urged members of the board to not minimize CDC guidelines for the sake of getting students back in the classroom. “It is disconcerting to see a push by some to scale-back CDC recommendations for in person learning that will endanger lives,” said Perry.

The divisions among the MCPS parent community comes at a time when resentment is building towards teacher unions and even teachers themselves.

Some teachers have faced criticism for their belief that reopening schools is simply not worth the risk, and that the hybrid model proposed by MCPS will be chaotic and often ineffective for teaching students. “We should not be bullied or disparaged as we worry about the safety of our students, our family, and each other during a pandemic that has killed close to a half million of our citizens,” added Perry.