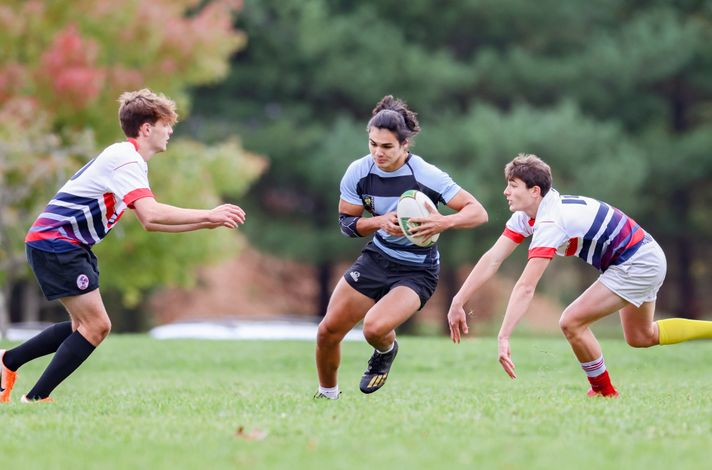 Participating in the Rugby Maryland Premier Division, Sherwood has 75 students on different rugby teams throughout the league. Most of the students play under the team the Maryland Exiles, including teams of boys and girls’ varsity and junior varsity. This past fall season, the Exiles went undefeated. However, like many other sports that are trying to play in the midst of Covid-19, rugby faced many obstacles, including protocols and different rules in order for it to be safe to play.

“It was not easy and very challenging,” said Coach Daniel Soso, who teaches social studies at Sherwood. “Our players had to learn different skills and how to move the ball in various ways, making it pretty challenging for all of them.  However, they embraced the challenge and had an extremely successful season as a result.”

In order to play this fall, the league created protocols and rules that teams had to follow to be cautious of the pandemic. Among these rules were safety precautions taken before and after practices and games. First, all players had their temperatures taken and hands sanitized before they took the field, followed by having all the balls and cones sprayed and sanitized prior to practice as well. The teams also had no contact practices,which dramatically changed how they conducted their training sessions. Whenever teams practiced and met together to discuss skills and game plans, all players and coaches would socially distance six feet apart from one another with masks. Teams practiced and played a modified version of two hand touch rugby that Soso noted, “challenged the skill level of our players.”

One player that participated in his fourth season of rugby at Sherwood under the Maryland Exiles this past fall was senior captain Tyler Lopes. Lopes was able to play on two different teams this past season, being a main contributor to the Exiles’ undefeated season.

“I believe the team did very well because we are such a tight knit group of guys and our chemistry shows on the pitch,” said Lopes. “We trust each other to make plays and keep possession of the ball which is a big part of the game.”

Lopes knows that as a senior himself, many of his teammates would not be able to play rugby again especially with college looming around the corner. He believes that since the spring season is still in question, having this modified season was a great way for athletes to get out and do what they love one last time.

Soso and the rugby club members advise all students to try out for rugby. They say even though you may not think it is your thing, everyone has a spot on the team. Along with the physical benefits of the sport, there is teamwork and leadership to be found in playing the sport.