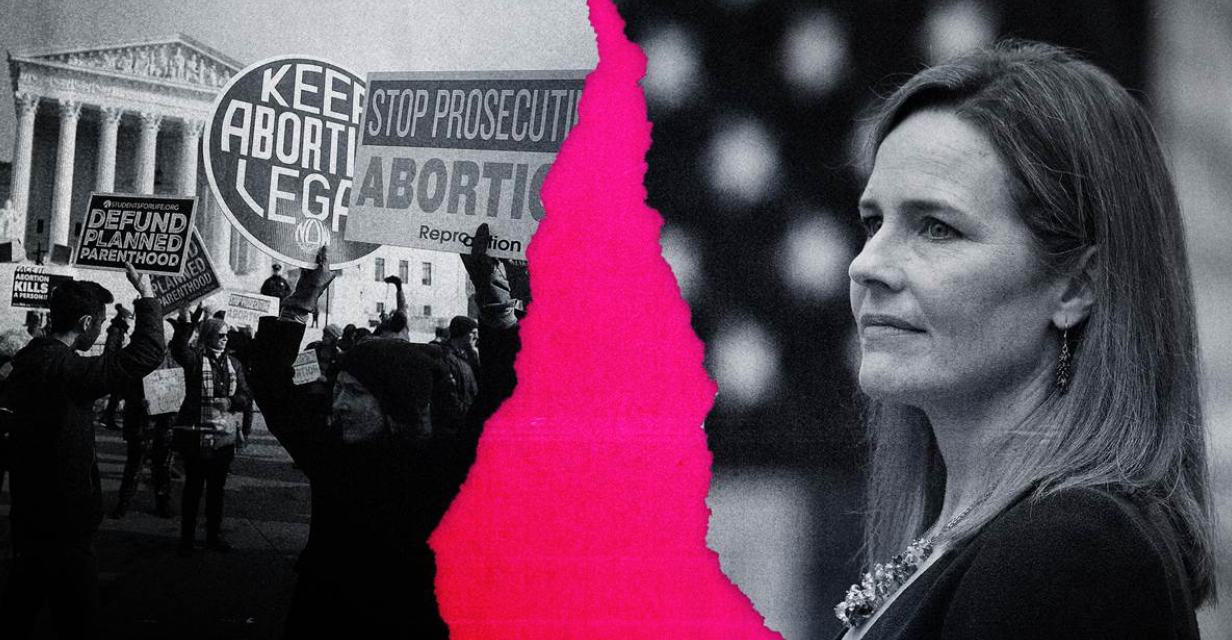 When deciding on a nomination for the Supreme Court to replace Ruth Bader Ginsburg, President Trump stated that he was looking for someone who would vote to overturn Roe v. Wade, a 1973 decision that legalized a women’s right to choose to have an abortion. He selected Judge Amy Coney Barrett, a 48-year-old conservative woman. Barrett has voiced her opposition to abortion many times through her activism, writings, and speeches. The devoted Catholic even gave two talks about abortion court cases at an event hosted by anti-abortion student groups in 2013.

However, Barrett refrained from talking about the event and her views on abortion more generally during her Senate nomination and confirmation hearings. When asked, Barrett said her personal beliefs should not affect her rulings as a judge. During her Senate hearing, Barrett commented that she does not see Roe v. Wade as a super precedent, which means that she does think that it can be overturned. Although Barrett stated that she doesn’t believe the core legality of abortion rulings will change at the federal level, she has made it clear that restrictions to abortion will happen. “I don’t think the core case, Roe’s core holding that women have a right to an abortion, I don’t think that would change. But I think the question of whether people can get very late-term abortions, you know, how many restrictions can be put on clinics, I think that will change,” said Barrett at Jacksonville University, in 2016. To women’s rights activists, it’s very clear that Barrett as a judge means a loss of rights.

Although Barrett joining the Supreme Court and solidifying a 6-3 conservative majority may not result in the overturning of  Roe v. Wade, there is a much greater likelihood that court rulings will permit states to make their own decisions concerning women’s right and access to abortion. Conservative states that pressed for more restrictions in the past will be quick to pass a series of bills. Georgia, Louisiana, Missouri, and Ohio have all already passed bills, commonly referred to as Heartbeat Bills, not allowing abortion past six weeks (which is significantly earlier in a pregnancy than the late-term abortions that Barrett has cited). Without protection from the federal courts, it’s almost certain that abortion for all intents and purposes will become inaccessible in those states. The extent to which Barrett plans to allow states to make their own decisions is also concerning. Barrett refused to answer a question asking if it would be a constitutional problem were a state to make getting an abortion a felony and punishable by death.

If the Supreme Court were to take away guaranteed choice on a national level, overall abortion rates would not change drastically but the risk level would increase. Guttmacher Institute, a non-profit reproductive health organization, stated that abortion rates in countries that prohibit abortion is 37 per 1,000 people, whereas, in countries where abortion is legal, the rate is 34 per 1,000. Women still get abortions in countries where it is illegal, but because of the restrictions, the abortions are dangerously done out of a medical office. WHO statistics report that around 25 million unsafe abortions are performed every year and are the third leading cause of maternal deaths. Denying women the right to choose won’t prevent abortions, just safe ones, which will lead to more maternal death and disabilities.

On Monday, the Senate cast their final vote, confirming Barrett’s appointment. Barrett was sworn in right away and she could even participate in cases surrounding the upcoming presidential election. As America waits in anticipation of the election outcome, pro-choice activists will continue to fight any threat to women’s rights.