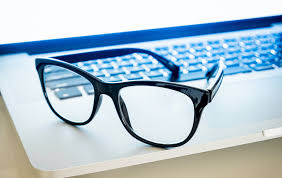 Prior to the global pandemic, teenagers already were spending countless hours looking at screens, but now with online learning, screen time has increased tremendously. I began to realize over the last few weeks that after hours on Zoom, my eyes would unfocus occasionally, and sometimes I would get headaches. I bought a cheap pair of blue light glasses on Amazon, assuming that hopping on that trend would help reduce the nagging side effects of being on my computer all day. However, whether it is my inconsistent use, the cheap quality of the glasses, or blue light protections in general, I begin to question if these glasses are actually helping with my headaches and eye strain.

Market Study Report, a market research company, predicts the global market for blue light glasses will increase to $27 million by 2024, $9 million more than in 2019. But are these millions of consumers, myself included, protecting their eyes or falling for a commercial scheme?

A high-end company known as Gunnar exclusively sells blue light glasses, which come in a variety of different strengths. Consumers are expected to select a strength based on preferred protection and tint of the lenses. The glasses are advertised to reduce digital eye strain, block blue light, improve sleep, prevent dry eyes, and minimize glare from a screen. Research has not yet proven if these are the detrimental effects of blue light or other aspects of looking at a screen.

According to Felix Gray, another blue light glasses seller, studies have proven that blue light suppresses melatonin production, making it harder to fall asleep and stay asleep. A study found that participants who wore Felix Gray’s blue light glasses had an increase in melatonin levels and consistency in sleeping patterns. However, the American Academy of Ophthalmology reported that decreasing screen time is the optimal way to improve sleep, rather than spending money on eyewear, because the light–any kind of light–from screens tricks the brain into suppressing melatonin production.

In general, many researchers suggest that symptoms such as headaches and eye strain primarily result from overexposure to screens, and the effectiveness of blue light glasses has not been proven. WebMD suggests that the best way to reduce the side effects of excessive screen time is to allow one’s eyes to rest every 20 minutes, avoiding glare from windows and lights, and positioning the screen so it is slightly below the user’s eye level.

In general, as many health professionals have not proven blue light glasses to reduce headaches and other side effects of one’s overexposure to screens, I would not recommend spending a significant amount of money on blue light glasses. However, wearing an inexpensive pair like mine will not cause any harm; it can only help as a placebo effect if nothing else.