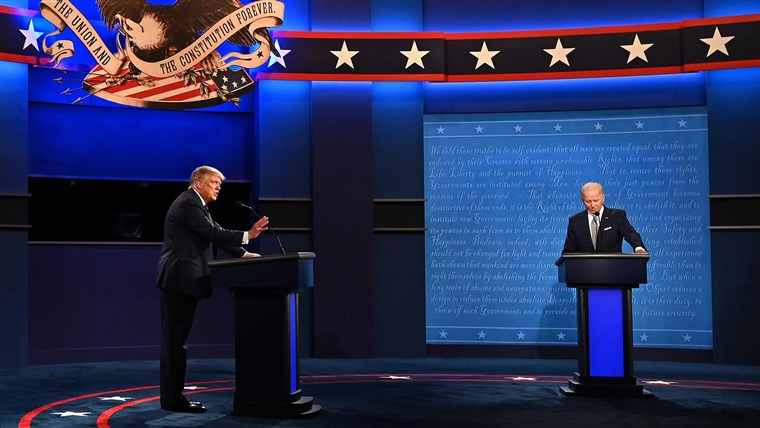 The first presidential debate of the 2020 election was … something. In the words of CNN reporter Jake Tapper, “that was a hot mess, in a dumpster fire, inside a trainwreck.” The messy debate contained personal attacks and a slew of interruptions. There is no coherent way to cover those chaotic 90 minutes, so instead let’s go over the three most memorable moments.

Trump hesitates and tells white supremacists to ‘stand by’

Moderator Chris Wallace questioned Donald Trump on his willingness to shut down the white supremacists and right wing militia that support him after Trump criticized Biden for not calling out ANTIFA. Trump hesitated, saying violence was not an issue of the right, but eventually addressed the right wing group Proud Boys. “Proud Boys, stand back and stand by. But I’ll tell you what, somebody’s got to do something about ANTIFA and the left because this is not a right wing problem,” said Trump. Joe Biden responded to Trump’s statement at the debate explaining that ANTIFA is an ideology and not an organization, to which Trump immediately interrupted and insisted on ANTIFA being a “dangerous radical group.” This statement by the President created immense celebration among the Proud Boys, who are now using it to promote their organazation which has been labeled as “misogynistic, Islamophobic, transphobic, and anti-immigration” by the Anti-Defamation League. However, shortly after the debate, Trump backtracked and told reporters he did not know who the Proud Boys were.

Responding to the New York Times article exposing Trump for not paying taxes on his personal income, he insisted he paid millions in taxes. “I paid millions of dollars in taxes … I paid $38 million one year, I paid $27 million one year,” said Trump, apparently counting any kind of taxes he or his businesses paid and disputing the NYT article that stated he only paid $750 in income taxes the year he was elected in 2016 and no taxes for 10 of the previous 15 years before that. Biden rebutted, telling the President to release his tax returns. “I don’t want to pay tax,” Trump replied, saying he used the tax bill that allowed him to use privileges for tax credits. “He says he’s smart because he can take advantage of the tax code. And he does take advantage of the tax code. That’s why I’m going to eliminate the Trump tax cuts,” said Biden, promising to “invest in the people who in fact need the help.”

On why Biden would be a better candidate for the people, he brought up Trump’s closeness to Vladamir Putin, calling him “Putin’s puppy.” “Your son got three and a half million dollars,” Trump interrupted. Continuing to make claims about Hunter Biden, “Hunter got thrown out of the military. He was thrown out dishonorably discharged … For cocaine use. And he didn’t have a job until you became vice president,” Trump said. Trump claimed Hunter was given tens of millions of dollars in Ukraine, China, and Moscow without having a job. Biden repeatedly insisted the President’s claims were untrue. “My son, like a lot of people at home, had a drug problem. He’s overtaking it. He’s fixed it. He’s worked on it. And I’m proud of him,” said Biden. Wallace tried to shut the argument down, but Trump continued to pressure Biden on his son and the alleged money he had received.