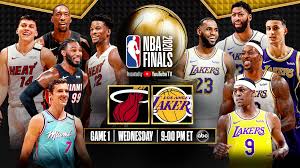 After five months of play, four months of hiatus and two months of bubble basketball, the 2020 NBA Finals finally have arrived. The bubble has created a safe space for shockingly entertaining basketball. With only virtual fans and a few family members added in the later rounds, the playoff basketball atmosphere nevertheless hasn’t exactly been missing on tv. The games have been tight and the players have kept a great level of intensity to Orlando. On top of all the good the bubble has brought, this year’s finals matchup will be historically great as the fifth seeded Miami Heat will take on the top seeded Los Angeles Lakers. You don’t have to look far for an interesting headline. Two of the biggest markets in the league facing off; LeBron James bringing the Lakers back to the finals for the first time since Kobe Bryant did in 2010; LeBron facing his former team; the grit of the Heat versus the glamor of the Lake show; and many more.

The Miami Heat, who were slotted as a borderline playoff team with young talent,have been flat out exceptional. The vets such as Goran Dragic, Jae Crowder and Andre Iguodala have been playing extremely well alongside the breakout stars in Bam Adebayo, Tyler Herro and Duncan Robinson. Of course all these pieces have been brought together because of star Jimmy Butler who signed with Miami in the offseason. To cap it off Miami also has one of the league’s most underrated coaches with Erik Spoelstra. The Heat ran through the first two rounds, sweeping the Indiana Pacers and then upsetting the top seeded Milwaukee Bucks in five before beating the Boston Celtics in six games, going 12-3 en route to being the Eastern Conference champions.

The Los Angeles Lakers were a heavy favorite alongside the Clippers to make it out of the West. After trading for star Anthony Davis in the offseason, LA was championship or bust out of the gates. The superstar duo ofJames and Davis proved to be the best in the league as James finished 2nd in MVP voting and Davis finished 2nd in the Defensive Player of the Year award and led the Lakers to the number one seed in the Western Conference. The bench includes veterans Danny Green, Rajon Rondo and Dwight Howard, all who have been vital to the Lakers’ success. There was a lot of noise surrounding LA coming into the playoffs about how they weren’t good enough to beat the Clippers, but the Lakers never even had to face the Clips as they were upset by the Denver Nuggets in the second round. LA took all three series in five games, beating the Portland Trail Blazers, Houston Rockets and Denver Nuggets in that order to win the Western Conference.

The main reason this series has such a high potential to be great is the individual matchups as well as each team’s play-style matchups. The Heat are the epitome of a 3 and D team (shooters and defenders) and have excellent on-court chemistry, a big difference from being buddies off the court. The Lakers do not have any great perimeter defenders nor perimeter threats to keep up with Miami’s 3-point shooting. However, LA does have three seven-footers who can defend the paint as well as dominate on the post. Butler presents the best head-to-head defensive matchup James has faced all postseason and the Bam vs AD matchup will be a battle of two of the top five big men in the NBA. The stars for the Lakers will show out no matter what, but the Heat provide the best chance to neutralize the duo’s control of the game. Miami’s bench is much deeper than LA so it will be interesting to see if third-year forward Kyle Kuzma can step up enough that James and Davis each don’t have to play 40 plus minutes a night. The Lakers will be the favorite according to any casino or media site, but the underdog persona is exactly how Miami wants to be seen. It wouldn’t be a shock to see either squad win, but I’m going to take the Heat in 6.