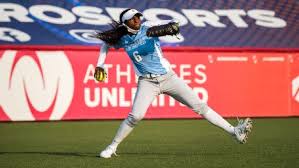 For the past 16 years, the National Pro Fastpitch (NPF) has been the only outlet for professional softball players to play competitively. Earlier this year, it was announced that there would be a new pro league, Athletes Unlimited (AU). AU is not a typical league, though. There are no set teams, so a new draft happens every week, meaning no two teams would ever be the same week by week. The league is planned to last five weeks from August 29 to September 22 and be played in Rosemont, Illinois.

The league is made up of 56 of the world’s best players from college standouts to Olympians. Five different countries are represented in AU from the U.S., Mexico, Puerto Rico, Italy, and Canada.

In typical pro leagues, winning as a team is the objective, whereas in AU it still is important, but each player is playing for points. At the end of each week of games, the top four players with the most points become the following week’s captains, who draft their respective teams. Teams are awarded points by winning games and “winning the inning.” Individuals can earn points for themselves by getting hits, and pitchers can earn points for outs they record. There are ways to lose points, which include getting caught stealing bases and for pitchers giving up an earned run. The player with the most points will eventually get a bonus in their pay at the end of the league.

AU partnered with large brands such as Carvana and GEICO. It  has  also partnered with baseball card company, Topps, and in the pack there is a card for all 56 athletes in the league. All of these partnerships are a huge step in softball, as normally it does not get recognition.All of the AU games can be viewed on ESPN and CBS sports, with nine games per week.AU already has plans to have a Volleyball league in 2021, and are hoping to add more womens and mens sports in the future.

Athletes Unlimited gives softball fans a new and interesting way to watch the game, while also letting more people be exposed to softball. In the softball world, this league is huge, but outside of it, not many people know about it. Being able to watch softball on television allows for the next generation of players to dream big in hopes that they make it into this very elite league. For the next three weekends, go onto ESPN and watch a game or two. These athletes are incredibly talented, and deserve to be watched.