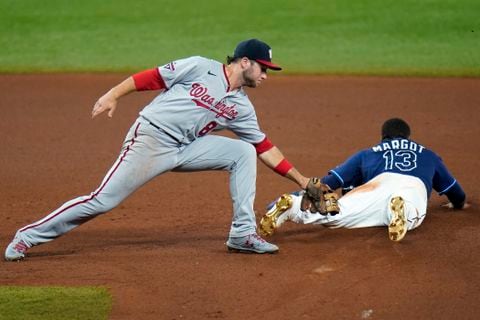 The Washington Nationals have struggled mightily throughout the 2020 season coming off their World Series Championship in 2019. Currently in last place in the NL East with a record of 17-28, the Nationals playoff hopes are all but gone. This, however, shouldn’t come as a shock to anyone as teams often have a difficult time managing expectations in seasons following championship runs. Washington also lost their best hitter in Anthony Rendon when he inked a seven year $245 million contract with the Los Angeles Angels.

Washington, however, has had no problems putting up runs in 2020. The team’s problem has been keeping other teams off the board. The Nationals boasted arguably the best starting rotation of any team in 2019; however, that once dominant rotation has been a shell of itself in 2020. It started with Joe Ross, the team’s fifth starter opting out due to covid-related concerns. The loss of Ross was compounded by World Series MVP Stephen Strasburg being diagnosed with carpal tunnel syndrome, which would require season ending surgery. All Star reliever Sean Doolittle has also dealt with injury and has not seemed to be the same player he used to be. The Nationals have had a lot of bright spots in their bullpen with multiple young players flashing tons of potential going forward. However the starters’ inability to keep runners off base has been a huge reason for the team’s struggles.

Washington has had some things going for them this season despite a gruesome record. For starters, Juan Soto and Trea Turner are both looking like future MVPs, and are possibly the best one-two punch in baseball right now. Tanner Rainey would likely have been an All Star reliever if there was an All Star game in 2020. Starting second baseman Starlin Castro went down early in the season with a broken wrist, so manager Davey Martinez called up top prospect Luis Garcia to take his place. Garcia has delivered as a rookie with 22 hits, eight RBIs, and a solid .293 batting average

Fans should not worry too much about the Nationals going forward despite their current struggles. The team has had many bright spots in their season and they are only a few pieces away from returning to contention in 2021. Washington could use another starting pitcher, whether in free agency or promoting someone from their minor league system. Additionally, the team needs a catcher as both Yan Gomes and Kurt Suzuki are older and not under contract after this season. Third base is also a big question mark. The Nats tried playing one of their top prospects in Carter Kieboom at the hot corner, but he has struggled heavily with the bat registering only one extra base hit so far this year. The Nationals should look to continue to develop their young players and turn their heads towards 2021. In a 60-game season anything can happen but no matter what, 2020 is always going to be viewed as an asterisk year for the MLB.