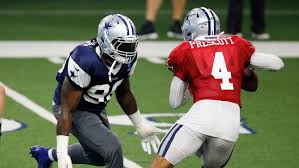 It doesn’t quite feel like football is here, and maybe that’s because of the whole global pandemic things or no preseason games, either or. However, FOOTBALL IS HERE! The year 2020 started with a great Super Bowl in which the Kansas City Chiefs took down the San Francisco 49ers 31-20 in an epic fourth-quarter comeback. One of the big changes from the offseason is the newly expanded playoffs, which allows seven teams from each conference to make the postseason rather than six and only the number one team from each conference getting a first-round bye rather than the top two. This season will certainly be unique, but so is everything else, so here’s how I see things shaking out in the 2020-2021 NFL season.

Since 2003-04, no team has won the NFC East back to back seasons. The Eagles took the crown last year but have too many question marks in the secondary and at wide receiver. Washington and New York are almost opposites with the Giants having a star-studded offense but a young defense and Washington having an elite defense with a young offense. The Cowboys just have too much talent even with a slightly worse roster than last year, so Dallas ends up stealing the division in a close race.

This is the best division in the NFL hands down. All four teams could make the playoffs and no one would be shocked. The 49ers are one offseason removed from a Super Bowl appearance and are deep on both sides of the ball. The Seahawks have a superstar in Russell Wilson. The Rams also have stars with Aaron Donald and Jalen Ramsey and Arizona has arguably the best QB-WR duo in the NFC West with Kyler Murray and DeAndre Hopkins. However, no team really got too much better or worse than one another in the offseason.

Who would’ve thought we’d ever get to see Tom Brady and Drew Brees in the same division? Even with no defense, Atlanta or Carolina could be a wild card team, but that’s the ceiling. You look at both Tampa Bay and New Orleans and it’s hard not to lock both into the playoffs. I do believe the unusual offseason benefits the Saints because of a more similar returning group than the Bucs. I’ll take New Orleans in another great division race.

The Packers won this division last year, but Green Bay has a declining Aaron Rodgers and only one wide receiver that can be trusted, in Davante Adams. The Vikings lost a couple key veterans and offensive coordinator Kevin Stefanski. The Bears are still giving Mitchell Trubisky the starting job so take them out of the picture. Last season, if Matt Stafford doesn’t get hurt the Lions record wouldn’t look anything like it did and they just added the best corner and (arguably) the best running back in the draft. Give me the Lions to take the North.

If you predicted anyone but the Patriots to take this division for the past 11 seasons, you’d be wrong. However, Tom Brady moved to Florida and the AFC East is as wide open as it’s ever been in two decades. The Dolphins are a year away from seriously competing and the same can be said about the Jets. New England doesn’t have the roster to be a playoff team even with Bill Belichick performing his witchcraft coaching. Buffalo has a tenacious defense and is ready to finally steal the throne away from the Pats.

The AFC West is interesting because the three teams in the division that didn’t win a Super Bowl last year are all on the same level. The Raiders, Broncos and Chargers won’t be gimmie games by any means and could all seriously challenge the Chiefs a year from now in 2021, but it’s the most certain of any division that Kansas City runs away with first place. The Chiefs are returning 20 of the 22 starters from their Super Bowl squad and Patrick Mahomes is only getting better.

Outside of a rebuilding Jacksonville, every team in the AFC South has a real chance to come away with the division. Tennessee was in the AFC Championship game but lost their best offensive lineman to free agency. The Texans won the division last year but then traded away their star wide receiver DeAndre Hopkins. Indy brought in veteran Philip Rivers to captain the offense alongside one of the best rushing attacks. The Colts have the best defense of the three so look for Indy getting their first division win since 2014.

The AFC North is known for their deeply rooted hate for one another. Cincinnati won’t be competitive this year but the rest of the division should be fun to watch. Baltimore has a loaded roster and has the best QB in the North by far, with the reigning MVP Lamar Jackson. The Browns and Steelers are relatively evenly matched teams and both playoff contenders. Sure, they could give Baltimore a good run but the Ravens are too talented not to win back to back division titles.