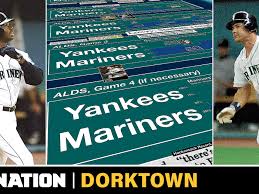 On March 12, the sports world forever changed when all sports were shut down. March Madness was canceled, the NBA was suspended, the NHL was suspended, and the MLB opening day was postponed. Since then there have been no live sports. Gradually as May progressed, live sports have returned. Rory McIlroy, Justin Thomas, Ricky Fowler, and Matthew Wolff played a golf match for Coronavirus relief. NASCAR has come back as well. The biggest sporting event in months was a charity golf match that raised $20 million featuring Tiger Woods, Peyton Manning, Phil Mickelson, and Tom Brady.

Other than the previously mentioned events, we in the United States have been sports-less for two months and have had to resort to reruns of games for which the outcome is already known and Netflix shows. The following are the best things that I have watched during quarantine.

3) SB Nation’s “The History of the Seattle Mariners | Dorktown”

The six-part YouTube docuseries narrated and created by SB Nation’s Jon Bois and Alex Rubenstien detail the full history of the Mariners. While a six-part docuseries on the Seattle Mariners might sound odd at first, the team has a fascinating history.

This docu-series goes into every detail about professional baseball’s history in the Pacific Northwest. There are points where you will get goosebumps during the doc. From optimism, to sadness, to excitement, so many emotions run through your body while watching the doc. Despite a six part documentary on the Mariners seems puzzling, it is absolutely worth a watch.

A gay, mullet-sporting, gun-loving, redneck who owns 180 tigers; sounds like an interesting documentary. This seven episode docuseries highlights the story of Joe Exotic, the owner of the G.W. Zoo in Oklahoma, and his legal struggles with Carol Baskin, owner of Big Cat Rescue in Tampa, FL. At first you think that this doc is about big cats, but it turns into a brutal legal feud between Exotic and Baskin.

Almost every person that got a cameo in the doc becomes unlikable at some point. Baskin seems like a good person who wants to rescue and nourish big cats during the first two episodes. After the third episode, you hate her with a passion. Similar case with Joe Exotic. Over time through his actions, you begin to hate him, too.

This docuseries shows the rise and fall of numerous people. Along with a rollercoaster of emotions, this doc is one-hundred percent worth watching.

We all thought we knew the Michael Jordan story, until we didn’t. That’s what “The Last Dance,” produced in conjunction with ESPN and Netflix, teaches us. We all thought that MJ’s 1993 retirement was a gambling suspension, but it really was a retirement. Jordan was tired and needed a break from basketball. Whether it be due to winning three straight titles or the recent and tragic murder of his father, Jeffrey, Mike chose to call it a career after just nine seasons. Game 5 of the 1997 NBA Finals, known as “The Flu Game,” was speculated by many to be a hangover. However, it was food poisoning from a pizza Michael consumed at 2 a.m. the morning prior to the game.

The other premise of the doc was to focus on the main storyline of the 1997-98 season, which was that general manager Jerry Krause wanted to rebuild the Bulls from scratch. Despite the Bulls going 62-20 and winning the 1998 NBA Championship, Krause would still follow through with his plans and rebuild the team.

Younger people nowadays did not have the ability to watch Michael Jordan play basketball in his heyday. This documentary allowed those who haven’t seen him play to watch how dominant Jordan was and to learn the story surrounding the Bulls. Not only that, this doc resurfaces the LeBron James vs. Michael Jordan discussion.