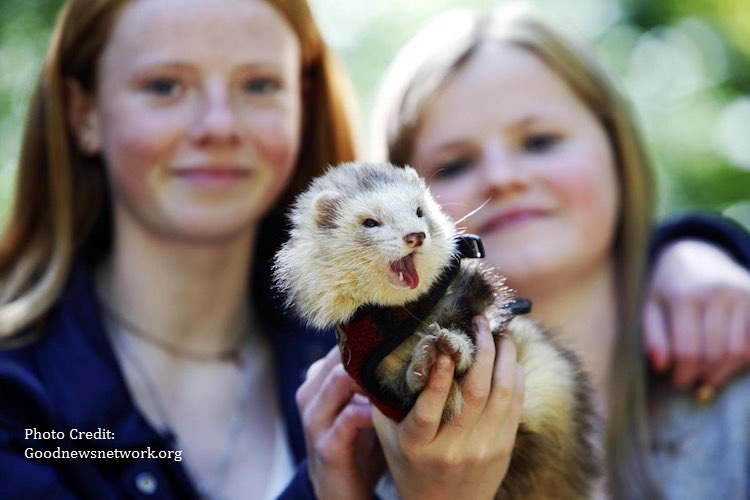 Most newspapers, magazines, and television newscasts show the same stressful and depressing stories of coronavirus, war, pollution, inequality, and divisive politics. Where are the uplifting stories? This constant negativity is harmful to one’s mental health. According to the Journal of Broadcasting & Electronic Media, television newscasts increase depression by 38 percent, and according to the Preventive Medicine Journal, those who read/watch the news more than 4 hours a week are 61 percent more likely to experience anxiety. Combating those statistics, below is a collection of recent uplifting news in the world!

According to Good News Network, Bandit, an 8 year old pet ferret in England, raised 2,500 dollars (2,300 Euros) for The London Children’s Book Project by finishing a 26.2 mile long marathon. The money is expected to provide 12,000 books to low-income homes.

Crayola revealed on May 21 the release of their new product, Colors of the World – a 24 pack of crayons specifically formulated to represent the majority of the world’s skin tones. These shades range from colors like “Very Light Rose” to “Deepest Almond”. In Crayola’s press release, their CEO (Rich Wuerthele) said “We want the new Colors of the World crayons to advance inclusion within creativity and impact how kids express themselves”. They will be on shelves in July.

On May 26, a huge milestone for LGBTQ rights was celebrated. According to BBC and Good News Network, Costa Rica became the first Central American country to legalize same-sex mariage. At midnight when the law was officially passed, the first lesbain couple, Alexandra Quiros and Dunia Araya, were married.

According to BBC News and Nature, scientists at The International Centre of Insect Physiology and Ecology (icipe) in Kenya discovered that a type of parasite known as Microsporidia protects mosquitoes (so far 100% of them tested) from being infected with malaria. The current plan is to implant this microbe inside male mistquotes in a lab, and then be released to mate with female mosquitoes, spreading the protection. This is the first sign that malaria could completely be eradicated in the future.

According to Good News Network, the georgia-based nonprofit Love Beyond Walls is working to install public outdoor sinks in areas with high rates of homelessness and poverty so people have a chance to wash their hands, and therefore have less risk of catching coronavirus. Dozens have been installed in Atlanta so far.

For the first time in history, on April 20, The United States Geological Survey, partnered with NASA, released a map of the entire lunar surface of the moon. The map contains a 1:5,000,000 scale, the most detailed one to date. An animation of the map can be seen here.

“10-Year-old Gives the Gift of Art to More Than 1,500 Kids in Shelters and Foster Care During Quarantine”

According to Good News Network and CNN, 10-year-old Chelesa Phaire created her own charity in which she donates art kits to children in homeless shelters, women’s shelters, and schools impacted by the coronavirus. So far she has donated over 1500 kits with items inside such as crayons, gel pens, coloring books, paper, and colored pencils. You can help her and learn more at https://www.chelseascharity.com/

According to FastCompany, (American business magazine) the company Ubiqd has created the product Ubigro, which manipulates nano-size crystals (that are used to emit color in television screens) to strengthen sunlight- without the use of electricity. Now, drastically more food and plants can be grown in greenhouses than ever before- already proven to increase tomato yields by 20.5%, and help protect the environment.

According to DailyMail, Finley Molloy, a 6-year-old Golden Retriever from Canandaigua, broke the world record for the most tennis balls in a dog’s mouth on May 27th! The previous world record was five tennis balls, from 2003. You can see the dog on Instagram here.