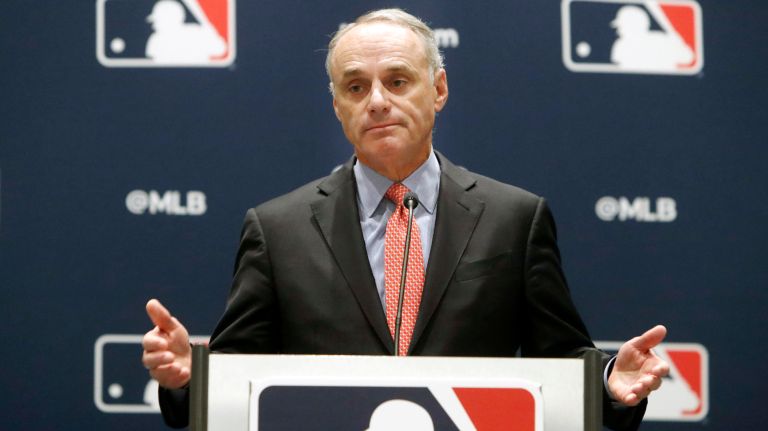 Over the years, Major League Baseball has had its fair share of controversies, whether it be substance abuse, corking and pine taring bats, or the infamous scandal of the 1919 Black Sox. But now, the league is faced with its newest scandal, the “stealing” of opposing pitchers’ signs.

Two of the past three World Series champions have been found guilty for sign stealing, the 2017 Houston Astros and the 2018 Boston Red Sox.

Following investigations of both teams, commissioner Rob Manfred announced that the Astros and Red Sox were guilty of stealing signs, albeit to two very different degrees. The Astros were fined five million dollars, lost their 2020 and 2021 first and second round picks, and GM Jeff Luhnow and manager AJ Hinch both received bans for the 2020 season. Additionally, manager Alex Cora was suspended for the 2020 season. All three were fired by their teams following the league’s report. The Red Sox, on the other hand, lost their 2020 second round pick, and the video replay systems operator was suspended for a year without pay and cannot be with the Red Sox for the 2021 season. Now the question remains, did the MLB let both teams off easy?

Pro (Colin): The more prevalent opinion is that the punishments weren’t nearly enough. Many believe that the MLB was way too soft on the teams, especially the Astros. Both people and players believe that the Astros’ title should be revoked, and along with it Jose Altuve’s MVP. I believe that is the right choice. Additionally, the Red Sox’s punishment should be more severe. Cheating at any level in sports is unacceptable, and for a team to do it at the highest level is so far beyond that. The fine of five million dollars is nothing to a team worth 1.5 billion dollars. So realistically, the MLB set the price for a title as four draft picks along with the GM and coach losing their job. By letting both teams off so easily, the MLB severely hurt its integrity, and instead of using this as an opportunity to set a zero-tolerance standard, the commissioner’s office made a fool of itself.

Con (Ryan): However, there are some who think the punishments given to these teams were reasonable, and maybe even a little over the top, and I agree with them. One of the main supporters of this position is Red Sox legend David Ortiz. Ortiz, a future hall of famer, who told Alex Rodriguez and Kevin Burkhardt of Fox Sports that the situation in Houston was much worse than the situation in Boston, and that the punishments put on the Red Sox were not fair. He went on to say that what happened in Boston is what everyone else in the league is doing right now, indicating that other teams are using their replay systems to tell players what signs the catchers are giving. Whether this is true or not remains to be seen, but it still is extreme to tarnish the career of a replay systems operator like Watkins. His career was not the only one ruined, as Hinch and Luhnow of the Astros now carry a stigma that might leave them out of a job for a long time. On top of that, many people have asked the MLB to remove the Astros of their title and second baseman Jose Altuve of his MVP award, which should not and will not happen. The league has never stripped a team of its title, so why start now? And as for Altuve, if Ryan Braun’s MVP was not taken away after he was proven of using performance enhancing drugs then there is no reason to remove Altuve’s. It just feels like some people want the MLB to do something that won’t really change anything in the long run.