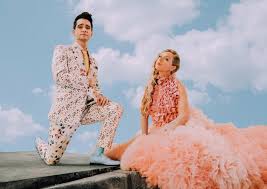 Less than two years after the release of her album “Reputation,” Taylor Swift dropped her new single “ME!” on April 26.

The wait for this single seemed long, mostly due to the fact that Swift promoted it on her Twitter and Instagram for about the last month. However what got many even more excited, was that the night before its release Swift announced that it would feature Brendon Urie, alternative singer and member of Panic! At The Disco,

The song release was overall very successful, as it’s now Vevo’s most viewed song in their first 24 hours of release so far. It was released along with a music video starring both singers.

Both Swift and Urie are renowned for their singing abilities and they lived up to that expectation for this single. Their vocals blended very nicely together, as if it were natural for them to be singing together. As well as stellar vocals, the song itself is very catchy and upbeat.

Despite all of this, when you really take time to listen to the song you start to see how empty the lyrics really are. The song revolves around the breakup of a couple, but the later realization that the victim of the breakup is unique and unlike anyone else. Swift attempted to send a message about embracing individuality and owning who you are. It’s a recycled version of various other pop songs out there, with lyrics and the video almost indistinguishable from  other songs of the decade. Coming from Swift, whose lyrics are usually much deeper and meaningful, fans were disappointed to hear a song without much meaning at all.

Although Swift worked hard to create an edgy persona around the release of “Reputation,” she completely regressed with the release of “ME!” With lyrics such as “Hey kids, Spelling is fun!” Swift seems to appeal to an even younger audience than she did in her country phase.

The lyrical content of this song failed to deliver. Taylor Swift is an amazing artist and this song unfortunately reflected poorly on her legacy.