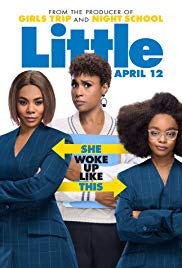 The 1988 classic movie “Big” that starred Tom Hanks is given a modern twist in the just-released film “Little.” The motion picture centers around Jordan Sanders (Regina Hall), an uptight tech mogul whose tyrannical nature has helped her business succeed but inhibited relationships with everyone around her. When a young girl wishes that Jordan would become “little” again, she is reverted back to her thirteen-year-old self (Marsai Martin) and forced to relive a time in her life where she was bullied for who she was.

With the help of her pushover assistant April (Issa Rae), Jordan returns to her middle school to find not much has changed: the students are just as mean and judgmental as they were when she attended. Jordan finds solace in a group of awkward teens who remind her of what she was like at their age, and takes them under her wing to make them “cool.” Initially, before she learns the error of her ways, she stamps out the passions those students take pride in, and insists that conformity and being better than everyone else is the key to success.

Jordan must learn to deal with bullies and peer pressure and use that newfound confidence to handle the stresses of adulthood, as well as start to open up and show emotion in various aspects of her life. As the film progresses, she learns that she can balance kindness with her drive for prosperity in order to finally find happiness.

Marsai Martin, who stars in the movie as young Jordan, pitched the movie idea and is also an executive producer on the film, making her the youngest producer ever on a big Hollywood movie at age 14. Martin convincingly plays the part of a 30-something-year-old, showing off a mixture of maturity and childlike playfulness throughout the movie.

Although the movie can be slightly confusing at times, overall this heartwarming comedy emphasizes overcoming self-doubt and being true to oneself. Filled with witty one-liners, relatable issues, and a fun, upbeat soundtrack, “Little” is fun for the whole family. The film also sends a positive message to those in their middle school years: that although they may face teasing and feel awkward at school, sticking to their passions and being confident in who they are will lead them to successful, happy lives.