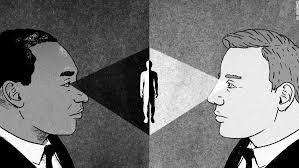 Discrimination is wrong; simple as that. However, we may not be completely in control when we choose to accept or reject others.

The amygdala, the area in the brain responsible for fear, decision making, and empathy automatically makes subconscious observations about others and quickly turns those simple observations into judgments that lack a situational attribution. Our brains are wired to assume that one’s behavior is due to the person’s personality–not the situation. This is called the fundamental attribution error–the basis of discrimination and hatred- when we take a situation and use it as a generalization. People have a cognitive bias to assume that a person’s actions depend on who they are, rather than what surrounds them, according to The Journal of Experimental Social Psychology.

Take this example: if you are walking down the street and see an African American male screaming on the phone and verbally attacking someone, the ventrolateral prefrontal cortex assumes that black males in general are violent and angry. That area (as well as the hippocampus) quickly asserts an observation as the context. Then we choose to accept the thought or create a new one. Unfortunately, in unusual or uncertain situations,“one-shot learning” accepts it rather than trying to figure out why. People tend to see cause and effect relationships, even where there is none, according to Psychology Today.

Attributing failures to dispositional (personality) causes rather than situational causes that are uncontrollable gives the brain a sense of security and helps find meaning in disturbing situations. Whatever the reason may be for that man’s behavior, our brains prefer to make an assumption and move on. Multiple studies, including one in 2003 at the Center for Neural Science at New York University, have shown over the decades that the amygdala lights up and increases its activity when it sees something it doesn’t know or doesn’t recognize. We are naturally afraid of what we don’t understand. While some decide to find out why, many find irrational ways to justify their fear, letting it guide their actions. If something is “close enough” to a threat, your amygdala will activate and get the rest of your mind, brain and body to respond for the sake of your survival, according to the Florey Institute of Neuroscience and Mental Health.

But there is more to discrimination than simply an unconscious preference. As our brains categorize people into groupings, we also tend to associate them with certain characteristics or stereotypes. An instant, unconscious association of certain groups with certain characteristics is called implicit bias. Harvard Medical School discovered that 75 percent of Whites and Asians have an implicit racial bias. Scientists have realized that when looking at groups of people, there is measurable brain response even though an individual may not be consciously thinking of it.

The dorsolateral prefrontal cortex and the anterior cingulate cortex in the brain exercises cognitive control, suppressing and contradicting inappropriate or prejudice judgments. This past March 2018, the journal Neuropsychologia discovered that religious extremism and intolerance for others share abnormalities in cognitive function in the dorsolateral prefrontal cortex. Individuals with underactive prefrontal cortices have greater difficulty keeping their prejudices and tribal instincts in check. Those are more likely to have nationalist and racist views. This also goes hand in hand–extreme religious fundamentalism harms the development or proper functioning of cognitive flexibility. While there are many hypothesis as to how and why this happens, scientists in the journal Nature fear that this could impact future human evolution–permanently.