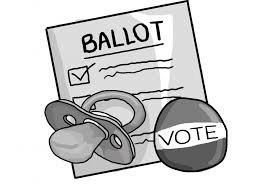 Spurred by the mass school shootings that have occurred throughout the past year, many young people have voiced their opinions and pressured lawmakers on legislation regarding gun rights. Teenagers across the country have orchestrated protests and marches that have not gone unnoticed by officials on Capitol Hill. The power in the rising voice of the youngest generation has convinced many people that young people have the knowledge and ability to vote earlier than 18 years old.

Earlier in the year, proponents of the campaign said they have the support of 7 of 13 D.C. Council members, a majority. The proposal has potential for assignment to legislative committees, a promising sign for teens who are eager to vote.

The continuing debate, however, is on whether or not 16 and 17 year olds are ready to vote. Opponents argue that 16 and 17 year olds cannot handle the responsibility and are uninterested in political matters. Advocates for changing the voting age believe youth are active and mature enough to vote.

Opponents believe that maturity levels of today’s teens are not suitable for deciding political candidates. It is a common assumption that young people continue to make irrational decisions that are often not backed by logical thinking. If youth do not take voting seriously, their votes can prove detrimental in elections. In addition, young men and women have shown to be the least active in the polls with slightly over 40 percent of eligible voters between 18 and 29 voting. The low voter participation rate for that age group signifies changing the voting age will not be worth the effort if participation hardly increases.

Psychologists have already published findings that teens do have the intellectual capability and maturity to vote. Youth develop cold cognitive abilities (better known as the capability to logically come to a conclusion) by the age of 16. These abilities are not emotionally influenced and are involved in the decision-making process for selecting a candidate. This level of readiness has many convinced that young opinions should weigh in just as heavily as current voters in the polls. Not only that, but using Denmark’s 16 year old voting age as an example, increased youth participation causes an increase in adult participation as parents will be more likely to vote because of their children. Increased participation from both youth and adults will fulfill the representative democracy.

Young men and women have been influencing legislation and swaying the opinions of many lawmakers for some time now, showing that activism and interaction with the government can bring great success. Some have already been more involved with politics than many eligible voters. Because of this, increasing numbers of citizens are asking, why not allow them to fully participate through voting?

The logistics of changing the voting age are quite complex. It requires a long process that involves committee assignments and a majority vote. Changing a law is a difficult feat in today’s heated politics. Even if the majority of the D.C. Council agrees to changing the voting age, it is safe to assume that 16 and 17 year olds will not be voting within the next few years.