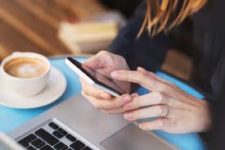 Most students constantly use their cell phones for a variety of tasks, from communication to school to social media. These devices are used by adults and young people alike, and with an increased use of the internet in all aspects of society, owning a cell phone is no longer a choice for those who wish to advance their careers or simply stay connected with family and friends. However, questions have been raised about the health risks of cell phones.

It has been found that excessive cell phone use can have an impact on mental health, particularly in the area of anxiety. According to reporting done by ABC News, using cell phones frequently can lead to stress and anxiety, and “phone-induced anxiety operates on a positive feedback loop,” in which people are kept in a “persistent state of anxiety” that can only be relieved by looking at one’s phone. This constant need to look at one’s phone can result in addiction and further mental health issues.

Another potential health risk of cell phone use that has been debated is cancer. According to the American Cancer Society, “most studies of people published so far have not found a link between cell phone use and the development of tumors,” even though it is also stated that these studies have limitations that do not make their results certain. The Centers for Disease Control and Prevention (CDC) has also reported similar results, stating that “overall, no increase of [brain cancer] was observed with use of mobile phones,” and that the “possible effects of long-term heavy use of mobile phones require further investigation.” The CDC advises people to make decisions concerning cell phone use based on data from the studies conducted.

However, the CDC also states that steps can be taken to reduce the potential risks of cell phones, saying that “the radiation received from a cell phone can be greatly reduced by using it away from the head,” when texting, using headphones, speaker phone, and bluetooth. The report also reminds consumers that “cell phones and all other wireless consumer devices comply with all safety standards.”