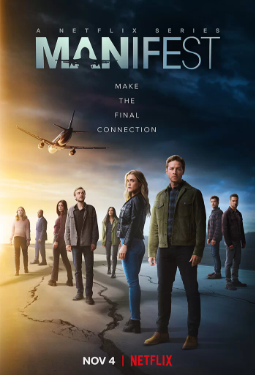 The popular show Manifest on Netflix, initially released in 2018, came out with the first part of its fourth and final season. The show revolves around the passengers on flight 828 who went through a storm and jumped five years into the future without aging or feeling a loss of time. Going through the storm resulted in the passengers of the flight having “callings” which are visions that can be followed to find clues about what happened to them in all that time. These callings have led to some big mysteries that have taken over the show like how to beat their deaths since they are supposed to die in a couple of years. Another mystery is finding one of the passenger’s daughters, Eden, who was taken by another passenger.  Even though these are the biggest mysteries, other smaller mysteries are all throughout the show which overwhelms the plot line.

The first three seasons left the audience with many questions that were only ever partly answered. The fourth season finally started to answer many of the mysteries but had little to no progress on answering one of the biggest questions: how to beat the death date? Luckily, the show answered the other big question and allowed Eden to reunite with her family. Even though the season started off solving the unknown, that trend stopped quickly. After a few episodes, no more previous questions were answered, only more discoveries were made. These overwhelming discoveries of clues leave the audience feeling dissatisfied as more unnecessary clues fill their heads, which only distracts from the biggest problem of the death date.

The fourth season builds upon the relationship between Zeke, another character who has callings and the ability to take someone else’s pain but was not on the plane, and the most important passenger on the plane, Cal. As Cal and Zeke built their stronger bond throughout the episodes, there is the disappointment as the first part of the season ends on a cliffhanger where Zeke dies for Cal as Zeke takes away Cal’s pain and puts it upon himself leading to his death. This is an emotional moment for not only the characters but the audience as well, as Zeke was a well-liked character who will be missed on the show.

Although the season had lots of mysteries and some answered questions, the plot line felt overwhelming with too much happening at one time. There was no progress on beating the death date which is the most important mystery to solve. As this is the final season, the show should not have left the audience with so many more unnecessary questions rather than answers. This leads to the question of will the last few episodes be rushed through to solve all the remaining mysteries.