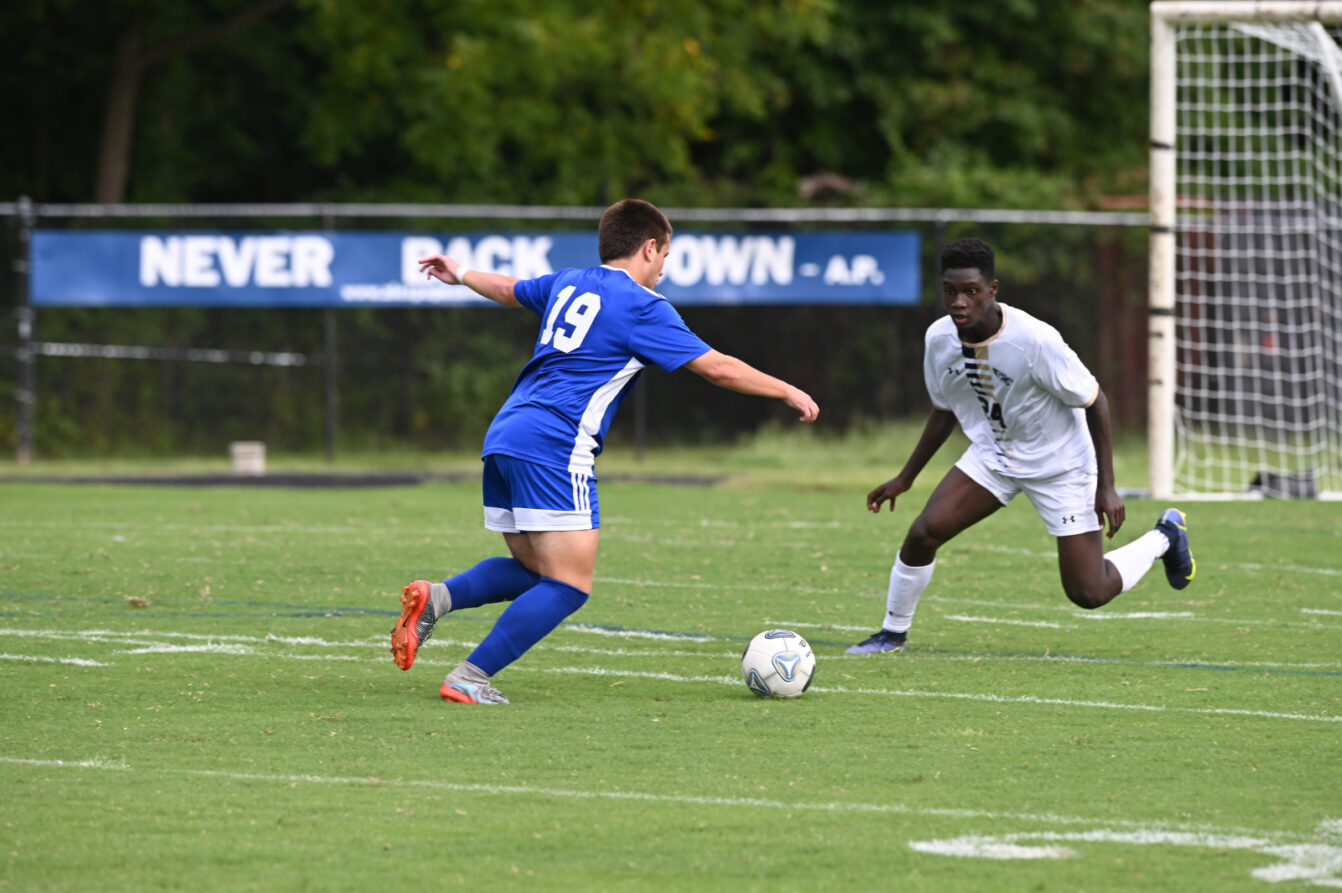 Senior Brian Llaguri in a game against Good Counsel. Photo by Sherwood Athletics

Sometimes a team’s record doesn’t necessarily tell the full story. Although boys soccer started the season 0-2-1, the Warriors were competitive for long stretches of games against some of the stronger teams in the area. According to the Washington Post Metropolitan preseason rankings, the Warriors played their first three games against No. 2 Good Counsel, No. 3 Whitman, and a “bubble team” in the rankings in B-CC.

In the first game of the season on September 8, boys soccer lost a 2-1 overtime thriller to Good Counsel. Sherwood maintained a lead throughout the majority of the game until the last minute when Good Counsel scored from a free kick to send the game into overtime. Both sides played great defense, but Good Counsel retained possession of the ball for the majority of the game and eventually won on a tap-in goal against a tired Sherwood defense. Following that game, the Warriors lost 4-0 to Whitman on September 13. Senior goalie Carter Braun was out with flu-like symptoms and senior backup Bryce Heinbuch stepped up in his place. The game was closer than the final score indicates because Sherwood allowed two goals in the final five minutes.

Even though Sherwood lost their opening two games, the signs were there for a potentially strong season. “We have the talent to play against anyone in the county or state; [the players] need to do the little things right and work harder to get wins,” said Coach Paul Homon.

The Warriors got a much needed result of a draw against the B-CC Barons after a long and grueling game. The game started off slow until midway through the first half, when B-CC scored off a header to put them up 1-0. However, ten minutes later senior Braden Kindred scored an equalizer making the game 1-1. Both teams created scoring chances throughout the game, but neither could capitalize before the overtime horn sounded to end the game in a tie.

Following this tough stretch of opening games, the Warriors won five in a row against Paint Branch, Blake, Einstein, Wheaton, and Northwood. On September 22, The Warriors got their first win of the season against an athletic Paint Branch team, 2-0. Senior winger Dany Brito-Silva scored on an outstanding header in the middle of the first half to put the Warriors up. The second goal came on a break-away goal by senior Braden Kindred, assisted by junior Astawaye Seyoum. The Warriors then beat Blake in dominating fashion on their home turf, winning the game 5-0 on September 27. The boys went to work early with a goal from Kindred just 10 minutes into the game. Kindred dominated the match, scoring his last goal late in the 2nd half, completing his first hat-trick of the season. With the help of the immense strength in the mid-field, the Warriors picked apart the Bengals’ defense. Thereafter, The Warriors were tested by Einstein. Despite facing one of the tougher teams in the county, the Warriors came out on top in a 2-1 win in the September 29 game. This game gave the Warriors confidence to steamroll past Wheaton and Northwood in commanding wins, winning 3-0 and 6-2.

Homon contributed the wins to the adaptation of “a blue collar work ethic as a team. Everybody is willing to do their role and play their part and outwork teams. We recognized what we needed to work on and continued to improve.”

Tonight, the Warriors look to end the Montgomery Blair Blazers own winning streak in an away game at 7:15. With a win today, the Warriors would be in an optimal position to win the division.