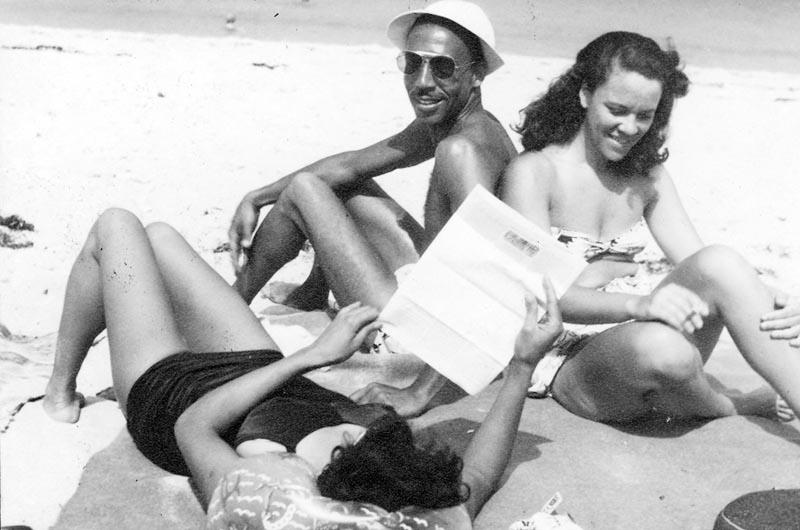 Beachgoers relax at Oak Bluffs Beach in Martha’s Vineyard, Massachusetts, during a time of segregation.

Nearly a century of racial segregation in the United States during the 20th Century was detrimental to the African American community and over time has led to black individuals playing catchup with their white peers. If there is any positive that came out of such systematic racism, it might be that black communities and families created their own spaces. This is true of so-called “black beaches,” such as Highland near Annapolis in Maryland, Sag Harbor on Long Island in New York, and Oak Bluffs on Martha’s Vineyard in Massachusetts. These beaches, necessitated by segregation, became havens for affluent blacks for decades and still today. Even when black communities were given beach areas in the more undesirable areas, they became places that thousands of black people visit each year. In the end, the plague of racism led to multiple safe havens for black americans. The ongoing history of these beaches are a testament to resilience and pride.

In the black community word travels quickly, which is why it should be no surprise that the only beaches they could go to became the only beaches they wanted to go to. Despite such obstacles, some beaches thrived and the homes built around them stayed in families, ultimately leading to the growth of historically black beach towns. Most of the land African Americans bought was considered unwanted and purchased at a cheap price, but this ownership allowed for black families to overcome segregation.

They created communities where they could not be oppressed due to their race because they were surrounded by people who looked like them. Highland Beach is the first known historically black beach in Maryland. Originally the beach was a place where black families in the area would go and visit for a weekend. Over time it became an area where black families began moving as their permanent residence. Today, the Highland area is much more diverse but still holds a majority black population. Its deep rooted history accounts for a community that is no longer segregated while still acknowledging its historic past.

After World War II many working class black families (usually New York natives) built houses in the Hamptons, unknowingly creating a predominantly black community of professionals unlike anything seen before. Black families were able to buy land in Sag Harbor for about 700 to 1,000 dollars (which is equivalent to 13,000 to 18,500 dollars today). Over the years the residents of Sag Harbor have fought off gentrification to retain a safe haven for black families where they can live around people that look like them and have the similar values and experiences as them.

Even farther north in Massachusetts right off the Cape is Martha’s Vineyard. Oak Bluffs is a popular vacation spot for middle and upper-class black families who live up and down the east coast. Shearer Cottage was a black-owned inn in Oak Bluffs and grew in popularity when it began being featured in The Green Book (an annual guidebook for African Americans roadtrippers). The Green Book was a key factor in the growth of safe havens for black americans because it allowed for word to spread about each place, which inevitably convinced more black families to visit and buy houses in the places they were learning about through the Green Book.

Each beach town individually has its own beautiful history that needs to be preserved, so that black people have access to spaces like these for many generations in the future. Segregation had terrible impacts on black americans, but historically black beaches are one example of how they overcame that adversity.