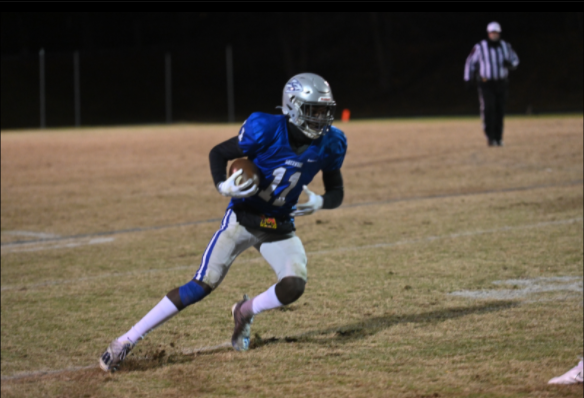 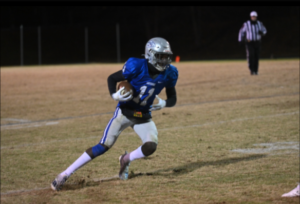 Senior Wide Receiver Eyasu Palmore with the ball at the State Semi-Finals Game against Mervo.  Photo by Sherwood Athletics

Sherwood football’s season has concluded with a loss to Mergenthaler Vocational-Technical High School (Mervo) in the State Semi-Finals, 34-7. The Warriors first season under the stewardship of Head Coach Andrew Fields finish the season with an overall record of 9-3 and won their region. Despite the loss, the football team still had a strong showing in the playoffs.

Following a first round bye, the Warriors kicked off their post-season with a 22-16 victory against the 2-6 Springbrook Blue Devils. The determined Blue Devils pushed Sherwood to one of their toughest matchups of the season. The only touchdown in the first quarter was a one-yard run by senior running back Dillion Beidleman. Springbrook moved the score within one point in the second quarter, but senior receiver Sean Scott caught a touchdown to close the first half, 15-7. The third quarter saw even grittier play. Beidleman scored his second touchdown to put the Warriors up 22-7. Then Springbrook started a comeback with a safety in the third. Then a touchdown in the fourth pushed the Blue Devils within six. Ultimately, the Warriors defense locked in and secured the victory. Senior quarterback Anthony Comeau said that their game against the Blue Devils wasn’t their best showing, but they “found a way to win, like [all] great teams do.”

In the Regional Finals, Sherwood took on arch-rival Blake and demolished the Bengals 42-21. The first half saw two Sherwood touchdowns, a run from senior running back Jeffrey Acheampong and a catch from sophomore receiver Alex Lacey. The Warriors also played strong defense, shutting out the Bengals in the first half. Blake sparked a comeback in the second half, with all 21 of their points being scored in the third and fourth quarters. But it was no match for the Warriors’ fire power on offense. They put up 28 points in the second half to cap off Sherwood’s best offensive game of the season. “Our offense ran the ball well, and thrived off of play-action,” said Fields. The Warriors accumulated 415 total yards of offense against the Bengals, which helped pilot them into the State Semi-Finals.

The Warriors came to an end against the Mervo Mustangs on November 26. Sherwood’s offense was simply no match for Mervo’s mighty defense. By the end of the first half, Sherwood was down 20-0 and had a massive hole to crawl out of. The Warriors held the Mustangs scoreless in the third and scored their only touchdown of the night. But Mervo struck right back and scored 14 in the fourth to send the Mustangs to the 3A/4A State Championship. Self-inflicted mistakes are what led to this loss, said Comeau.

Coach Fields is counting upon his underclassmen to take the foundation the upperclassmen laid and hopefully win a State Championship in the coming seasons. “It is a privilege [to coach this team], and we are just getting started,” said Fields.