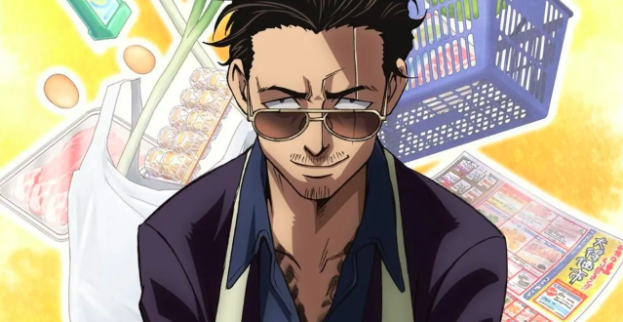 In “The Way of the Househusband,” an ex-gang leader now finds himself as a “pro househusband.” As he goes throughout the show, he is continuously assumed to be a yakuza–a Japanese mafia member. He comes across multiple gangs, reinforcing to them his now violence-free lifestyle and ending any conflicts he comes across without causing any harm. “The Way of the Househusband” is a recently released Netflix original anime. This show contains 6 episodes, each a total of 16 minutes in length, an extremely quick watch. Despite being a new release, this short anime quickly rose to the top 10 TV shows on Netflix.

This show is extremely cute, in both its looks and its writing. The style is really interesting and clean, giving a very happy feel to the show. There are a lot of moments when I would laugh out loud while watching; the sense of humor in the show is very sarcastic and straightforward, proving to be extremely funny (the little scenes with Tatsu’s (the main character) cats at the end of some episodes really made me snort).

This being said, I lean more towards disliking this show. Firstly, the show is too short. It was really hard for me to get into this show considering it doesn’t have a plot whatsoever; rather, it’s just random scenes put together into one episode. There are definitely a lot of anime that follow this sort of storyline where each episode is just a compilation of random plots, so this may just be a preference of mine, but I did find myself getting bored during each episode. The parts I found the most entertaining throughout the show were the clips of the main character’s cat going about it’s day. I probably would have rather watched a show about the cat instead of this show.

Next, the animation of the show. The style is really clean; however, the characters are barely animated at all. The majority of each episode just uses pictures of each character, kind of like a comic, and just has those pictures move instead of actually animating the characters. I’m not sure if this is a common occurrence in anime–I’d never seen it before–but I wasn’t really a fan of it. To me, this kind of animation made the scenes seem lacking, like there should be more happening that’s missing. When the characters actually did get animated, I thought it looked really well done, but this was a rare occurrence.

I didn’t hate “The Way of the Househusband,” but I also wouldn’t say I liked it necessarily. I think this could have been really good if it was animated differently. In the end though, this show is a refreshing break from other anime with constant drama and heart-wrenching content; it was a good breather.