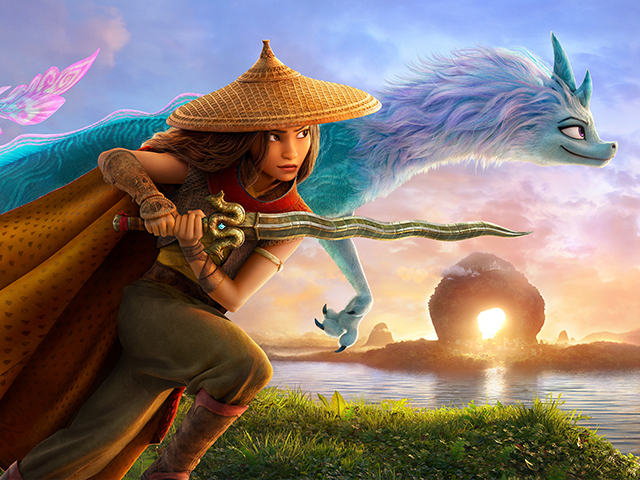 Disney’s “Raya and the Last Dragon,” directed by Don Hall and Carlos López Estrada, is a magical experience. With a mix of different Asian cultures and blending in some of its own ideas, the film is a dynamic experience that can be enjoyed by all ages. The film shows off an entertaining and thought-provoking experience, especially for a Disney movie. The movie also contains some of the best imagery that Disney has ever produced, placing the characters in a setting that feels vibrant and alive.

The story follows Raya (voiced by Kelly Marie Tran) as she attempts to restore a stone that can stop the Druun, an evil force that turns people into stone when it touches them. She journeys to find all the shard pieces and unite them together, and revert her father into a person again. Along her journey, she meets Sisu, the dragon who made the stone in the first place, and together the two continue to collect the shards. Along the way, they meet characters from all the different regions who decide to help them on their quest.

Within the plot are many themes, many of which could be learned by people today. The theme of trust and forgiveness are constants throughout the film, and they lead to a very mature story that never seems to talk down to the audience. “Raya and the Last Dragon” constantly explores deeper themes and more complex plots that are rarely seen in blockbuster animation, and it can easily be enjoyed by anyone watching. Of course, it’s not a perfect movie, as no movie is. There are points at the end of the film where the themes could be shown by imagery and the animation alone but are instead explained through dialogue that almost feels unneeded.

In addition to the strong writing, the movie is also animated phenomenally. The different scenery and settings draw the audience in, and it creates a world that feels very much alive. The thought that was put into each different scene, ranging from fight scenes to just scenes of dialogue, is astounding. There feels like there is life in the background of each scene, not just in the center. The animation looks wonderful, and the characters move so smoothly which further helps the film grab the audience’s attention. The choreography for the action sequences is good; they don’t feel too crowded and the audience is always able to tell what is going on. The emotional impact of “Raya and the Last Dragon” is surprising, but done well. The story does a good job of making the emotional moments impactful, without having too many jokes which would ruin the moment. The writers did a great job at making the audience connect with the characters in a short time, and the tense moments feel even tenser because of the connection. Each character has a backstory that makes the audience want to root for them, and none of the characters are really annoying. The emotional climax of the movie is honestly really well-executed, and it was all thanks to the connection that the audience can make with the characters.

“Raya and the Last Dragon” is one of the best Disney movies in recent years. The Walt Disney Animation Studios clearly put a lot of effort into it, and it paid off. With the country seeming to be divided by politics right now, it is nice to see that, even if fictional, it is still possible for a world to unite after being broken for so long.