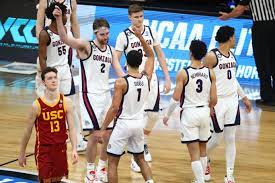 The first matchup between Houston and Oregon State is an interesting one. Houston is a great defensive team that relies on the scoring of former five-star Quentin Grimes to win games. However, to win this one and advance to the Final Four, the Cougars will need to shut down the Beavers standout player, Ethan Thompson, just like they did to Buddy Boheim. Houston should win this one, ending the Beavers’ Cinderella run. Moving on, the matchup in the south region may be the most chalk. One seed Baylor takes on the three seeded Arkansas Razorbacks. Baylor should be able to hold off the Razorbacks, with their stellar backcourt taking them to a Final Four game against Houston. The last two teams to make the Final Four are the clear title favorites Gonzaga, and a team that has opened up a lot of eyes this tournament, the UCLA Bruins. Even if the Mobley brothers over at USC shut down Gonzaga’s Drew Timme, the Bulldogs still have two more All-Americans in Jalen Suggs and Corey Kispert that can take over the game. The Bruins, on the other hand, will need their magic to continue against a great Michigan team that has managed to step it up through the loss of Isaiah Livers, but the Bruins can continue to light it up from three point land on their way to their first final four since 2008. In the final four, Gonzaga will beat UCLA, finally ending a surprising tournament run by the Pac-12. On the other side, Baylor vs Houston is a toss up, but Baylor will come out on top. Gonzaga will beat Baylor, winning their first ever national championship.

The ‘Zags Win Their First Title

This year’s March Madness has seen an unprecedented number of upsets, and with the Elite Eight beginning with Oregon State vs. Houston, the Beavers will pull off yet another and become the first 12-seed to ever reach the Final Four. The Baylor Bears have been rather impressive, and the Bears’ elite shooting will be too much for Arkansas’ defense to keep up with, as their high pace of play will take its toll on the Razorbacks. Gonzaga has been the heavy favorite since the tournament began, and they will continue to roll against the Trojans of Southern California. The Mobley brothers will continue their elite play, but the dynamic trio of Kispert, Suggs and Timme will bring Gonzaga to their first Final Four since 2017. After overcoming a buzzer beating and then dominating Alabama in overtime, the UCLA Bruins are set to face off against the Michigan Wolverines with a Final Four berth on the line. The Bruins have increible depth (5 double-digit scorers), and the Wolverines’ second leading scorer Isiah Livers is out with a foot injury. With another huge upset the Bruins will become just the second team ever to go from play-in game to final four. The Beaver’s Cinderella story will continue as they stun the world with an upset over Baylor, but UCLA will fall to Gonzaga. The Championship will then become a David vs. Goliath matchup, with Oregon State becoming the first 12 seed to make the National Championship. The Bulldogs will ultimately prevail in a rather uneventful fashion, winning their first National Championship in their program’s history.

Gonzaga Delivers on the Hype

In the West region, the number six seeded USC Trojans may be the hottest team in this whole tournament. However, number one Gonzaga is still the heavy favorite for good reason with three NBA level talents and the Bulldogs will advance. For the East region, the top seeded Michigan Wolverines battled through some early games but now take on the underdog in the eleven-seeded UCLA Bruins. UCLA has been red-hot since beating Michigan State in the First Four round and here in a matchup with the other Michigan school, the Bruins will complete the sweep of the state of Michigan and continue their dance. Down South, the Baylor Bears take on Arkansas. The Razorbacks took out America’s sweetheart in their last game, Oral Roberts, but this game is going to be a different breed. Baylor has the most well-balanced roster remaining and will rightfully earn a spot in the Final Four with a win against Arkansas. The Midwest region is going to have Houston take on Oregon State. If you hadn’t seen either of these teams play before March, you aren’t alone. Houston plays fast and will stop the Beavers to get their spot in the Final Four. That leaves Gonzaga, UCLA, Baylor and Houston as the last four standing. Gonzaga should be licking their lips if they get lucky enough to get UCLA as their Final Four matchup as the Bulldogs would roll their way into the championship. Baylor and Houston would be a great matchup to watch offensively, but Baylor outduels the Cougars and meets Gonzaga in the championship. Two number one seeds and the two best teams in college basketball meet in the finals. March delivered and so will Gonzaga as they win their first title in school history.