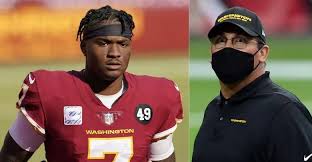 The Washington Football Teams’ quarterback play over the last few seasons has been deprived of a star. Since 2000 Washington has started 22 different QBs. Seven of those started under former Head Coach Jay Gruden. After finishing 7-9 in 2018, The Football Team landed the 15th overall pick. Washington proceeded to select Ohio State gunslinger Dwayne Haskins. Haskins was seen as a big QB with a big arm who was hard to take down but is not that mobile. Similar to Ben Roethlisberger or Jameis Winston. In his lone year as the full-time starter for the Buckeyes, Haskins threw for over 4,800 yards, threw 50 balls that reached the end zone, and placed third in the Heisman Trophy voting in 2018.

That all looked good on paper, but Haskins has been mediocre at best as an NFL quarterback. In his 13 games he’s thrown for 2,304 yards, 11 touchdowns, and 10 interceptions and has looked like a shell of his Ohio State-self. Shocker, since NFL defenses are far better than those in the Big Ten.

On top of Haskins’ poor play, Washington’s other QBs have been less than okay in their lone appearances. Kyle Allen was having a tough time against the ferocious Rams’ defense. Then Jalen Ramsey came along and knocked Allen out of the game. This forced Alex Smith to enter the game for the first time in almost two years after suffering a brutal leg injury. The QBs combined for 111 yards and were sacked by Aaron Donald and company 8 times.

A potential reason as to why Haskins got benched is his attitude. In Washington’s Week 4 obliteration at the hands of the Ravens, Haskins threw for 314 yards and completed 71 percent of his throws in the 31-17 loss. Following the game, Haskins would presumably be upset about his team losing. Instead, he was bragging about his stats to his teammates, according to reporting by Mike Garafolo of The NFL Network. This likely pushed Head Coach Ron Rivera over the edge and promptly benched his QB.

Another plausible reason is that Rivera has a guy in house that already knows his system. Washington traded a fifth-round pick to get Carolina Panthers QB Kyle Allen. Allen started the majority of Carolina’s games last year in place of the injured Cam Newton. Rivera made this move because he wanted to have an option at QB who already knew his system in case Haskins does not perform well.

So what does the benching of Dwayne Haskins actually mean for the Washington Football Team. It means that Washington, Rivera specifically, has no faith left in Haskins. He was drafted to a Washington team in 2019 by Dan Snyder when his coaching staff was on its way out. He was drafted into an organization that did not want him, and after a coaching change, they still do want him.

Now, there is speculation that Washington is looking to trade Haskins. The sad reality is that they probably don’t have any other good options except to try again for a new QB. Washington sits at 1-4 through 5 games. If they continue this pace, they will finish with a top 10 pick in the 2021 draft and be in prime position to draft a new QB. Washington could look into drafting Clemson’s Trevor Lawrence, Ohio State’s Justin Fields, or North Dakota State’s Trey Lance. One of them eventually will get to be Washington’s 23rd starting QB over the past two decades.