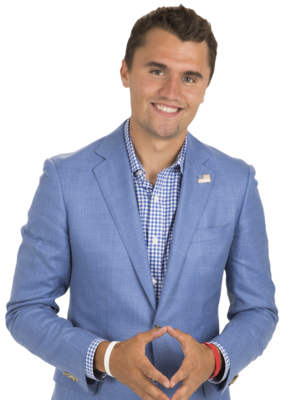 The Dartmouth Review has called him a “man child,” but the President of the United States, Donald Trump, has considered him a “great friend,” and an “incredible guy.” But who really is Charlie Kirk without the taint of party affiliation and ideology?

Charlie Kirk is 26 year old, evangelical Christian who grew up in Prospect Highs, a suburb of Chicago, and attended Wheeling High School from 2008 to 2012.

He took classes at Harper College, a community college, but Kirk never formally obtained a degree of any kind. His academic accolades do not stop there, and he was rejected from the United States Military Academy at West Point. After his rejection, he has gone on to claim that his spot went to “a far less-qualified candidate of a different gender and a different persuasion.” Since stating that in 2015, he told the New Yorker that he was sarcastic in his remark, and as of 2019 he has denied ever saying such a phrase. Despite never attending a four-year college, or obtaining any type of degree traditionally, Kirk was awarded an Honorary Doctorate from Liberty University, a private evangelical Christian institution in Virginia.

Kirk arguably got his start in 2012 after writing a piece on the libral biases in high school textbooks for the far-right news platform Breitbart News Network. Not long after, Kirk got Republican donor Foster Friess to bankroll his non-profit conservative organization, Turning Point USA (TPUSA), a conservative student organization

The mission of TPUSA is to “identify, educate, train and organize students to promote the principles of fiscal responsibility, free markets and limited government,” according to the TPUSA website. TPUSA now has representation on over 2,000 college and high school campuses. Since its founding in 2012 TPUSA’s affiliated organizations are Turning Point News, the Turning Point Endowment, Turning Point Action, Students for Trump. Currently, Students for Trump is a major part of President Trump’s grassroots movement for re-election. TPUSA has been going to swing states across the country knocking on doors, and passing out flyers despite the Covid-19 pandemic.

Along with creating a successful non-profit, Kirk has made countless appearances on Fox Business, Fox and Friends, and other Fox News shows. Most recently Kirk has spoken at the Republican National Convention for the second time, since his first appearance in 2016.

Not everything about Kirk is so straightforward. Kirk is constantly seen stating his conservative opinion to mobs of liberal protester, at countless events across the country. Despite the slanderous profanities normally shouted at Kirk when he attends one of these events, he remains calm, and watches his every word, so that no protest can use them against him. As well as his calm appearance when being mobbed by people of another ideology, Kirk might be one of the, arguably, most persuasive public speakers of his generation. His crisp, clean, and to the point ideas could make some liberals do a double-take on their opinions.

In addition to his persuasive manner, Kirk has made very misleading claims during the Covid-19 pandemic. President Trump was not the person to coin the term “Chinese Virus”, but it was actually Kirk in a tweet posted on March 20, 2020, saying “Now, more than ever, we need the wall, With China Virus spreading across the globe, the US stands a chance if we can control of our borders…” Kirk is not only controversial on Covid-19, but he is also a big advocate for filling former Supreme Court Justice, Ruth Bader Ginsburg’s seat on the court, only a mere 6 weeks before the 2020 Presidential election. Recently, many Facebook and Twitter accounts are being suspended, because of their comments casting doubts on the reality of Covid-19 and the mail-in voting during the 2020 election. These accounts have been linked to a TPUSA-affiliated company. Currently, it is known that the company has been paying teens, some of them minors, to post the spam-like comments across social media on news articles about public health and the upcoming election.

If you want to see more of Charlie Kirk click here to find more of his media, and here for his Instagram.