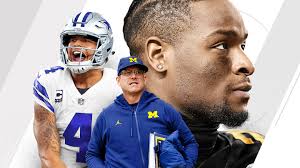 The 2020 NFL season is underway! This season is one of the highest anticipated seasons because of Covid-19 shutting down sports for over three months and the numerous off-season moves in the NFL. With each new season, there are a few teams that are clear contenders for the big game in February. Here are the top four contenders for the 2020 season. The secret to being a great NFL analyst is not that you’re right with your predictions; it’s only that you fool your audience into believing you’re an expert.

The New York Football Giants are a young team on the rise with a great budding star of a quarterback in Daniel Jones. Sadly, Big Blue lost their star running back Saquon Barkley to the ACL demon. This is not to be feared because New York employs former Patriots’ star Dion Lewis. The G-Men on offense also have wideout Darius Slayton and tight end Evan Engram. On defense, there is stud LB Blake Martinez and CB Logan Ryan. Overall, the Giants are a quality contender from the NFC with multiple stars on offense and defense.

The Cincinnati Bengals are coming off of a historically bad season in 2019. However, this team can rebound and come back better than ever. Their star running back, Joe Mixon, is coming off of back-to-back 1,000 yard rushing seasons. A.J. Green has returned from injury after missing the entirety of last season. While Green may never look like his Pro Bowl self again, he can be a solid number one receiver for Burrow. On the other side of the ball, there is the heart and sole of the defense, Geno Atkins, as well as Carlos Dunlap and newly signed D.J. Reader. To sum up, the Bengals are a veteran team surrounded by a young, talented quarterback.

The Washington Football Team had one of the worst off-seasons of all time. The name change happened and then damning allegations of sexual harassment. There was one upside to this off-season however, as Washington was able to draft future superstar DE from Ohio State Chase Young. What will carry this team to a title is their defensive line. Young, Ryan Kerrigan, Jonathan Allen, and Matt Loannidis are the stars of this defense and those who will carry this team to a title. The offense is not as talented but has its stars. Terry McLaurin had a stellar rookie season and is destined for a breakout season. This team’s defense is ultimately what will win them the title this year.

Jacksonville has been interesting over the last few seasons to say the least. They have self-imploaded since their 2017 run to the AFC Championship. Only a handful of players from that run remain in Jacksonville, but that does not mean that they can’t contend. There is second year stud QB Gardner Minshew, along with Pro Bowl WR D.J. Chark on offense. Defense is where this team shines. There is DE Josh Allen, Joe Schobert, and Myles Jack. This Jaguars team offers a lot on offense and defense and can be a serious threat in the AFC.