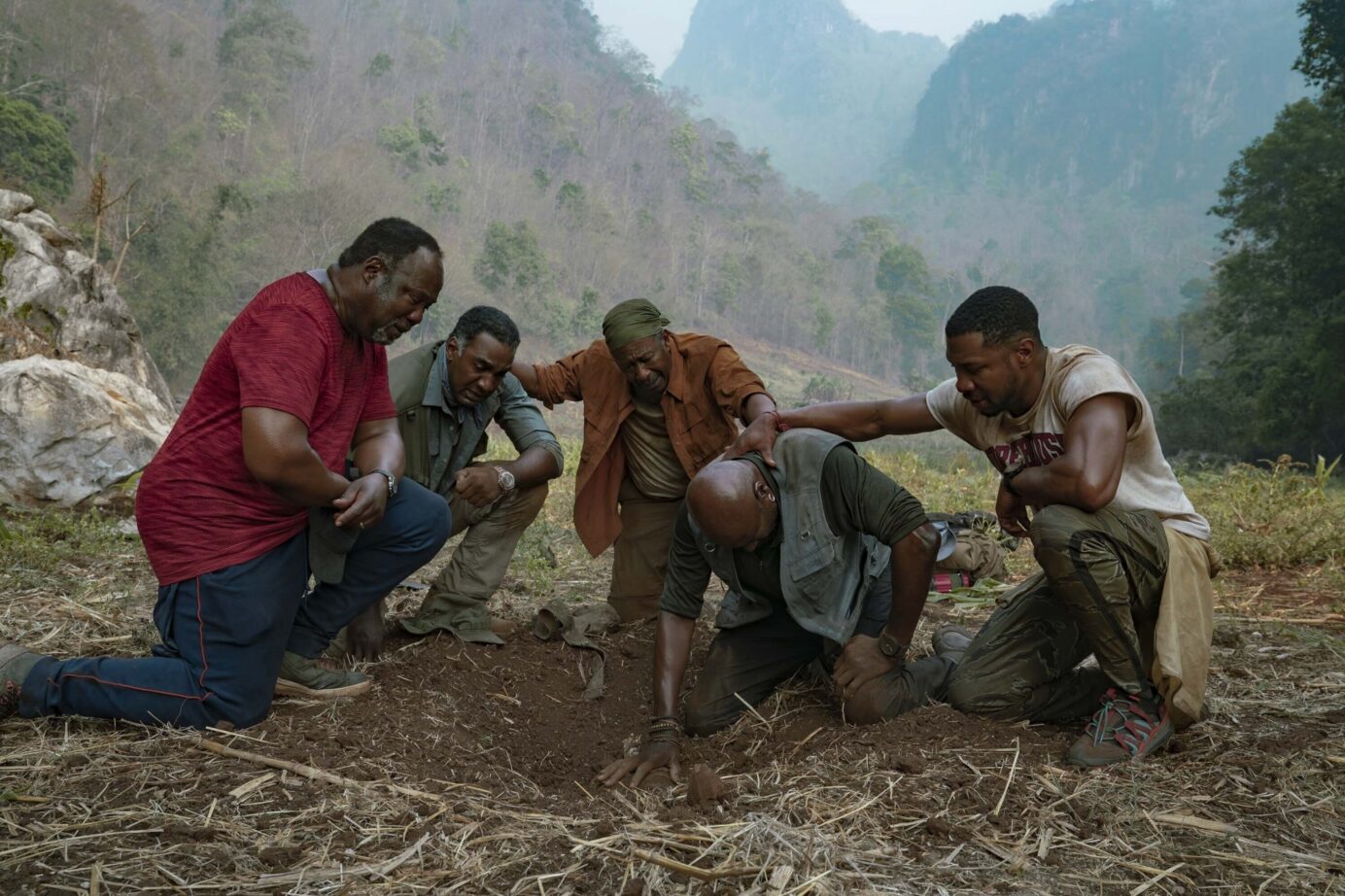 The first thing viewers will notice while watching “Da 5 Bloods,” the latest from prolific filmmaker Spike Lee, is how timely it is. The film, which was released by Netflix on June 12, opens with a rousing montage of archival footage sprawling the state of America through the 1960s and 70s. Set to Marvin Gaye’s stirring “Inner City Blues,” the prologue compares the civil rights movement and the violent government pushback it spawned with America’s brutality and imperialist attitude in Vietnam. It is impossible to look at the protests, systemic racism, and police brutality displayed on screen and not draw a connection with America’s current situation. It is this unfortunate resemblance between past and present that lays the foundation for Lee’s thesis throughout the rest of the film: nothing has changed.

The montage closes with a photograph of five African American soldiers—the titular “Bloods”—raising their fists to the sky. Following a seamless transition, Lee travels to the present day where four of the pictured soldiers are reuniting in Ho Chi Minh City. The four vets, Paul, Eddie, Otis, and Melvin, are on a mission to locate and recover the remains of the fifth Blood, “Stormin’” Norman Holloway, the wise and heroic squad leader whom the group sees as “[their] Malcom and [their] Martin.” Unbeknownst to Vietnamese law enforcement, the four friends are also searching for the priceless stash of gold bullion that they discovered and buried decades ago. The quest proves to be far more treacherous than anticipated, as the group must not only confront past traumas and a difficult political climate, but also the violent remnants of the Vietnam War and the lasting effects of American imperialism.

What ensues is an overstuffed and earnestly messy mix of genre, tone, and style. Lee crams as many overindulgent ideas and narrative threads as he possibly can into the film’s hefty 155-minute runtime. One moment it’s a bittersweet hangout film about growing old, the next it’s an anguished rumination on the effects of trauma. Sometimes it’s a father-son melodrama, others it’s a nail-biting thriller, an action-packed caper, or even a grisly neo-western. Bits and pieces of history, social commentary, and political insight are tossed around in an uneven clutter. Despite Lee’s overwhelming ambition—under which most filmmakers would crumble—he pulls it off, and he does so with style. The film’s script—which Lee wrote alongside Danny Bilson, Paul De Meo, and Kevin Willmott—nails each tonal shift with the help of sharp dialogue, deeply human characters, and crushing amounts of emotion. Rather than losing focus on the bigger picture, the script’s audacity enhances the power of its message and creates a thoroughly layered exploration of its many powerful ideas.

“Apocalypse Now,” one of the most obvious influences for Lee’s film, uses the violent jungle journey at its center to chronicle the dehumanizing effects of war and a harrowing descent into the darkest spaces of the mind. “Da 5 Bloods” twists that central plunge into the depths of Vietnam to explore a traumatized group’s reliving of their tragic past and the ways in which their collective grief has shaped them. This film is an emotional powerhouse. It is a loud and visceral barrage of sentiment, filled with as much sorrow as it is contempt, rage, and remorse. Lee’s vibrant direction breathes loads of humanity throughout, but the film’s most affecting sequences would not be possible without its excellent cast. Everyone is great, but the clear standout is Delroy Lindo, whose unforgettable performance will almost certainly go down as one of the best of the new decade. He plays Paul, the most tragically disturbed of the Bloods, whose guilt-ridden past has turned him into a simmering ball of angst and fury. He displays many traits of an antagonist; he’s short-tempered, greedy, menacing, and even xenophobic, and he also boasts a “Make America Great Again” hat through most of a film that refers to the president as the “Klansman in the Oval Office.” Despite this, he is not the enemy. Underneath all of his uncontrolled anger, hatred, and bigotry is a pervasive sense of heartache that reveals him not as the villain, but rather the victim; the victim of an inescapable past and one of many victims of a nation in which black lives do not matter. Lindo communicates this inner turmoil in a way that is fierce, striking, and often devastating, but at the heart of his empathetic performance is a call for love and unity in a time that it is most needed.

Throughout “Da 5 Bloods,” the line between past and present is blurred. The platoon’s trek through Vietnam is frequently interrupted by the remembrance of history. Modern day is shown akin to the past through clever editing, extended 16mm war flashbacks and the flashing of documentary footage and archival photographs on screen, each suggesting that the world we saw in the prologue is the same world we live in today. Early in the film, the group’s tour guide, Vinh, states that war “never really ends.” Just as the Vietnam War prevails decades after it supposedly ended, the war against racism in the United States rages on. But that doesn’t mean we should stop fighting.

“Da 5 Bloods” reaffirms why Spike Lee is so often considered one of America’s most vital filmmakers. It’s a bloated but beautiful call to action, packed with vivid filmmaking, powerful performances, and urgent writing. It is unmistakably a Spike Lee Joint.