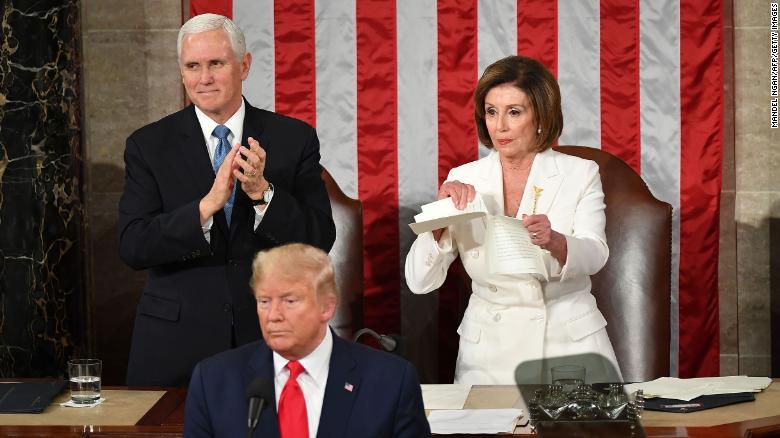 Trump Gives 2020 State of the Union Speech
President Trump held his third annual State of the Union speech this past Tuesday. In summary, the biggest points of the President’s speech included the announcement that unemployment is currently at a 50-year low and the stock market is up about 20 percent in this past year. He also announced that one of his guests that night, a fourth grade girl, would be receiving a scholarship to any school of her choosing, all while not once mentioning his recent impeachment trial. The Internet’s favorite moment of the night occurred when House Speaker Nancy Pelosi ripped apart the President’s speech after he refused to shake her hand during their introductions.

President’s Job Satisfaction Rate is at its Highest

President Trump’s job satisfaction rate is at its reported highest, currently standing at 49 percent. This most recent poll took place during the President’s impeachment trial, also reporting that his approval rating among Republicans is up six percent, now at 94 percent. Some news stations conclude that these increased approval ratings may be a result of the President’s recent military interactions with Iran, foreign trade, and the boosted economy,

Iowa Caucus Ends in a Mess

The Iowa Caucus is generally meant to be a good representation of where the Democratic candidates stand in the race towards the general election. However, this year’s caucus suffered multiple technical difficulties, from issues with the app to inaccurate finals reports. Currently there is no official winner and no news station has made an projections on who the possible winner may be.

Biden May Be Replaced by Sanders as the Top Democratic Candidate

In the current state of the Democratic candidate race, former Vice President Joe Biden currently stands at most likely to win the primary and face President Trump in the 2020 General Election. However, recently Bernie Sanders has risen in the polls and may overcome Biden to become the Democratic candidate. Some Democrats worry that as a self-proclaimed “Democratic-Socialist”, Sanders may not be able to get the votes of Democratic moderates and Independents in the General Election,