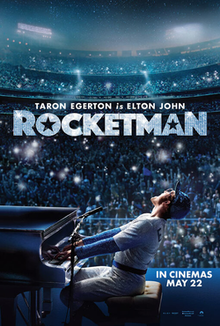 Singing. Dancing. Crying. These are just three of the many reactions you will experience when watching Elton John’s life story on the big screen. From outrageous and exciting concert reenactments to heart-wrenching scenes of overdoses, “Rocketman” embodies a true rockstar’s lifestyle of sex, drugs, and rock and roll. With the assistance from the Rocketman himself, director Dexter Fletcher brings to life John’s uncensored human story in an extremely interactive experience.

Beginning with young Elton breaking into a musical number, I would be lying if I said I wasn’t fearful of a cheesy, boring movie. About 10 minutes in however, I realized my assumptions could not have been further from the truth. Not only was I instantly sucked in by the sequences of flashbacks and flashforwards into the various stages of John’s life, but the occasional spontaneous musical numbers brought the perfect amount of lightheartedness after any intense and dramatic scene.

To pinpoint some key moments of success, I have to first give massive applause to actor Taron Egerton for the nearly flawless depiction of Elton John from his teenage years in the 60s all the way to his middle age years in the 80s. He managed to have every single mannerism of John’s spot on as well as staying true to each aspect of John’s vision. In addition to his brilliant portrayal of the pop rock legend, Egerton sings all of John’s songs with a voice that is truly indescribable. Although not that similar to John’s, Egerton’s raw and raspy vocals contribute greatly to his ability to pull the audience in and feel a real connection to John.

The film also features actors such as Richard Madden as John’s long term boyfriend, John Reid, Jamie Bell as John’s lyricist, Bernie Taupin, and Bryce Dallas Howard as John’s mother, Sheila Eileen. Each of these portrayals also played a huge role in bringing the film together and really dove deep into the crazy roller coaster ride that is John’s life.

With some of John’s hit songs like “Rocketman” and “Crocodile Rock,” even those who may not be that familiar with his more obscure music are still able to have a great time in the theater; bopping their heads along and tapping their feet.

After the numerous heartbreaking and stressful moments throughout the film, the audience is presented with positive facts about John’s life today right before the credits as a brilliant way to end a true cinematic masterpiece.