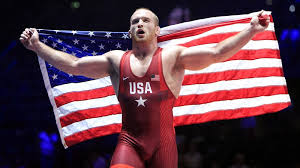 Wrestling fans across the country will be watching as the best wrestlers in the nation compete at the Final X championships to earn the right to represent Team USA at the 2019 Senior World Championships in Astana, Kazakhstan, in September. Final X debuted in 2018, added by USA Wrestling as another step in determining the best wrestler in each weight class. A returning world medalist automatically receives a berth in Final X, and wrestles the winner of the World Team Trials, which occur in May, in a best-of-three one day series. However, if there is no returning medalist, then the winner of the US Open in April earns a spot in Final X, again wrestling the winner of the Trials in a best-of-three series.

This sets the stage for various exciting matchups in the event. These matchups are split into two different weekends, however, with certain weights competing on June 8 at Rutgers University, and the rest competing June 15 at the University of Nebraska.

The Maryland community, however, will have something special to watch: Our Lady of Good Counsel High School alum Kyle Snyder, who competes on June 15. Snyder wrestled at Good Counsel from 2010-2013, where he went 179-0, before forgoing his senior year to train at the Olympic Training Center. Snyder is pound-for-pound one of the top wrestlers in the world, winning 2015 and 2017 world titles, as well as a 2016 Olympic Gold medal, before falling to Abdulrashid Sadulaev of Russia in the 97 kg (214 lbs) world final last year.

Snyder is the heavy favorite in Final X, where he will face off against Kyven Gadsen, whom Snyder beat in Final X last year. However, Gadsen has beaten Snyder before, in the 2015 NCAA finals, when Snyder was a freshman at Ohio State University, and Gadsen was a senior at Iowa State University.

Another reason Marylanders can get excited is Pat Downey, albeit a slightly different reason. Downey, a Baltimore native who won multiple Maryland state titles in high school, won the US Open at 86 kg (189 lbs), then won the World Team Trials in May, clinching a spot in Final X to compete against returning world champion David Taylor. However, Taylor suffered a knee injury May 6, and announced on May 24 that he will be unable to compete, conceding the spot to Downey.

If all goes well, Maryland could have two wrestlers competing in the World Championships, right along with some of the greatest athletes this country, and world, have to offer. The events will be live on FloWrestling.com.