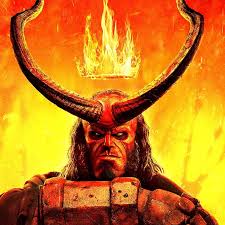 The Del Toro (previous director) “Hellboy” collection are two of my favorite movies. The combination of horror and sci-fi creatures are truly breathtaking, and mixed with a great story and plenty of action, makes the originals something very special. I was hesitant to see that the 2019 reboot was under a new director and cast. Why mess with the original films when it was already a hit.

The torch was passed down to director Neil Marshall and the new Hellboy, performed by David Harbour. From the opening scene I was bombarded by the speed of the plot and I could hardly keep up with the cringeworthy gore. The script was weak and undeveloped to build suspense. Everything was rushed; the story started of well with what happened in the past, but right after everything ramped up real

quick and went straight into Hellboy being the prophecy. The dialogue was lackluster and gave away everything; there was nothing to focus into.

Harbour did a great job taking on the character. Hellboy’s dialogue was strong, and felt masculine which made him do significantly beast during fight scenes. Also, I can appreciate the similarities it had to “Hellboy: Golden army”(previous movie). Bargains being made, and jokes referencing to the old films was a joy to watch. Amazing characters like Baba Yaga nodded to comic book fans when he was introduced; however the character’s emotional connections were undeveloped.

Add to the clutter of the plot, some truly embarrassing computer-generated imagery (CGI) made the movie difficult to watch. The two practical effects in the movie outside of Harbour’s costume and makeup made the movie feel poor. The movie is almost entirely CGI; the movie looks cheap. Sometimes there’s the sense that cheap is what Marshall was going for. The gags and the jokes never landed well enough to audience. Other scenes and characters just look out of place, to the point where the terribly green-screened edges and horribly rendered monsters actually seem distracting.

Marshall’s Hellboy isn’t lousy because nobody wants it, nor only because it fails to live up to the hype. It’s just lousy. It is less funny than it aims to be and misguided in key movie decisions.. The film does make bold choices that might’ve paid off under other circumstances, but I do not recommend this movie and advise viewers to consider another movie.