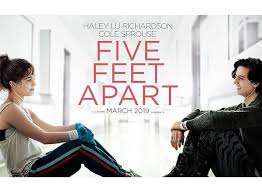 The new movie, “Five Feet Apart,” came out in theatres March 15 and the world was not ready for a story like this one. Directed by first time director Justin Baldoni, the film tells the story of Will and Stella who are both patients in the Saint Grace Hospital and have Cystic Fibrosis (CF). Baldoni knew right away that he wanted Cole Sprouse to play Will, and after sitting down with Haley Lu Richardson, he knew he had found his Stella.

Throughout the movie, the audience learns more about the characters as individuals before getting into the relationship between the two of them. Viewers also meet Poe, Stella’s best friend and played by Moises Arias. He is in the hospital for CF along with Stella and Will.

The main setting of the movie is the Saint Grace Hospital, which could have made it very difficult for Baldoni to set the whole movie in one place because it can limit the director’s creative ideas on how to implement different places into the storyline. Baldoni did a great job working around it to portray the characters’ lives while working in the setting to his advantage.

The main issue with movies in the past like this one is the portrayal of the sickness the main characters are suffering with. Stella and Will are both living with the disease, Cystic Fibrosis, though they are diagnosed with different forms of it. They both do their treatments for the certain types they have, and do a very good job at portraying a real version of how the disease affects their everyday life.  Many movies take out some details of how the treatments are performed, which can actually have a major effect on their health. Stella and Will do have the majority of the details needed to portray a patient with cystic fibrosis. They include certain aspects such as the ports on their chests, the tubes by their lungs, the masks they wear when they walk around the hospital, and the nasal cannula they have on most of the time to be able to breathe clean air. The movie being called “Five Feet Apart” does cause a little bit of confusion due to the fact that people with cystic fibrosis are supposed to stay six feet apart at all times. That part is explained more in the movie and has to do with the individual character’s storyline.

“Five Feet Apart” is a great one to watch and experience throughout. Baldoni did an amazing job at portraying this difficult story to the audience. The story of Stella and Will is one that will increase people’s knowledge about cystic fibrosis and hopefully shows the true struggles that people with the disease go through everyday.