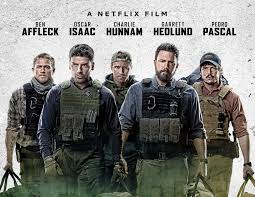 “Triple Frontier”, directed by JC Chandor, is a Netflix film that gives a good mix between other military-themed heist movies like “Three Kings” and modern crime thrillers like “Sicario” and Netflix’s “Narcos”. The movie stars Ben Affleck, Oscar Isaac, Pedro Pascal, Charlie Hunnam and Garrett Hedlund as former soldiers who set off to the border between Argentina, Brazil and Paraguay (known as the ‘Triple Frontier’) in order to steal millions of dollars from a notorious cartel leader.

The movie focuses on the breakdown of each of the character’s morals due to their own greed, in addition to the camaraderie between each of them. “Triple Frontier” differentiates itself from other heist movies and military thrillers by showing more grounded motivations for the protagonists that shed light on the realities that most military personnel face when returning to civilian life, in addition to showing a much more character-driven conflict instead of a typical Hollywood action movie.

Each of the main characters start off the film very idealistic and enthusiastic about the raid. Affleck’s character wants to get money to help pay for his children’s college and Pascal’s character wants it to raise his new family. And Hunnam and Hedlund’s brother duo simply need the money from the heist in order to live without having to work dead end, post-military jobs. In contrast with many popular movies about similar soldiers of fortune, the characters all intend to pull off the job without firing a single bullet.

Once they actually get to the house where the money is stored, Affleck’s character, dangerously pushes their time limit to escape in order to take more and more of the money. Soon they are forced to abandon increasing amounts of money in order to escape across South America. This causes emotional conflict between the tightly knit crew of former soldiers, with morale and cohesion breaking down as they become increasingly desperate, shown by their increasing disregard for civilians in their way.

The emotional conflict shown between the characters in the context of them trying to survive in South American jungles and mountains creates a much more intriguing and complex climax than many simple shootouts present in movies of the same genre.