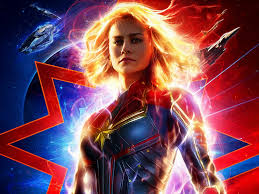 On March 8, Marvel Cinematic Universe released its first ever movie with a solo female lead, as Brie Larson stars as Carol Danvers, better known as Captain Marvel. Directed by Anna Boden and Ryan Fleck, “Captain Marvel” sheds light upon why Nick Fury sends a message to Captain Marvel before Thanos wipes out half of life across the universe at the conclusion of “Avengers: Infinity War.”
In “Captain Marvel,” the year is 1995, six years after Carol Danvers, a U.S. Air Force pilot, goes missing. After having her DNA affected during an explosion, Danvers has the power to fire energy beams from her hands; however she suffers from amnesia and nightmares that limit this ability. She now lives as an extraterrestrial warrior on an alien planet known as Kree. After an alien race known as the Skrulls attack Kree, Danvers finds herself in an intergalactic battle between her people and the Skrulls. During this battle, she is captured by Talos (Ben Mendelsohn), the Skrulls commander. However, Danvers manages to escape and ends up on Earth. Her presence attracts S.H.I.E.L.D Agents, which includes Nick Fury (Samuel L. Jackson). With help from Fury, Captain Marvel tries to piece together her past, while learning to channel the full potential of her superpowers to defeat the Skrulls.

Brie Larson, the Oscar-Award Winning actress from “Room,” takes on a different role than what fans are used to seeing her play. “Captain Marvel” allows the actress to showcase a more disciplined, fierce, yet sensitive side. Despite Captain Marvel’s character having amnesia, Larson’s performance depicts the superhero’s sarcasm and confidence. The audience is able to connect to Danvers’ moments of quiet pain through Larson’s portrayal of emotions throughout the movie. The scenes in which Larson and her co-star, Jackson, share the screen, provide viewers with action sequences and moments of humor, as the two share natural chemistry.

Danvers embodies female strength in “Captain Marvel,” as her character was constantly knocked down from childhood to flight school by those around her. However, she persevered through these setbacks. Eventually, Danvers becomes the superhero whom all of the other superheroes’ fate rests on. When the rest of the Avengers failed in “Avengers: Infinity War,” Nick Fury called upon Carol Danvers.

“Captain Marvel” is set in the 90’s, unlike the other Avengers. This allows Captain Marvel to carve her own place in the Marvel Universe. The distinctive era allows fans to gain insight into the backstory of Nick Fury as well, which was well.

“Captain Marvel” distinguishes itself from the rest of the Marvel movies with Larson’s riveting performance and the well written plot, which ties together the events of “Avengers: Infinity War” and the events to take place in “Avengers: End Game.”