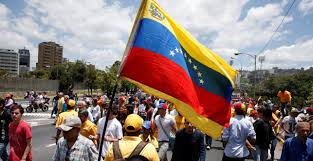 On January 23, the United States became the first of 23 countries to recognize Juan Guaido as the President of Venezuela. This came after Guaido, head of the National Assembly, was declared interim president after the Venezuelan legislature invoked their constitution, which claims that if there is no current president, the head of the National Assembly becomes president. The Venezuelan legislature said that incumbent President Nicolas Maduro’s rule is illegitimate because of his banning of opposition groups in the last election.

This potential for restoration of democracy in Venezuela is important both for its people, and for the balance of power in the region. However, Turkey, Syria, Cuba, Iran, Russia, and China have voiced support for Maduro and stood by as mass starvation, economic ruin, and human rights abuses have run rampant.

Mass protests have been going on for weeks. Maduro’s first response after the United States declared support for Guaido was demanding that American diplomats leave the country. The State Department waved this off as an empty threat, and the embassy has continued to operate since then. Support for Guaido has shown to be popular among the people, with country-wide protests in support of him still ongoing.

On February 23, trucks filled with humanitarian aid attempted to cross from Colombia into Venezuela. They were met by force from the Venezuelan military, who ended up burning the trucks. According to the Associated Press, around 300 Venezuelan soldiers have defected to Colombia. Additionally it was reported by various sources that 14 protesters were killed and over 200 wounded by the Venezuelan military. On the coast, six Venezuelan Navy destroyers intercepted an aid shipment from Puerto Rico, forcing it to turn back.

Multiple high-level military officers have endorsed Guaido, but until majority of the enlisted troops turn, it is unlikely that a direct removal of Maduro will happen in the immediate future. In the meantime, Maduro’s regime is ready to crack down on the opposition. On February 14 the Washington Post reported that at least 40 protesters had been killed by Venezuelan Police death squads. Additionally, two civilians were killed and 12 wounded by Venezuelan soldiers at the border with Brazil while they were attempting to cross the border.

America’s geopolitical stake in this conflict is clearly shown by the influence Russia exerts in the country. While many will claim that American interest in Venezuela is their abundance of oil reserves, this over-exaggerates America’s dependence on foreign oil. What is important for the U.S. is Venezuela’s location and relation to American adversaries. In December 2018, two Russian nuclear bombers visited Venezuela, and Russia expressed desire to build an airbase in Venezuela. Their support Maduro was quickly demonstrated by reports that 400 mercenaries were sent, by Russia, to protect Maduro. China is also invested in Venezuela, with it being the center of their efforts to expand their military presence in South America. Additionally, the Chinese government has sent technicians to assist regime security officials in blocking off internet access in the country.

American involvement in the crisis is primarily focused on diplomatic and economic tactics. For example, veteran Cold War-era diplomat Elliott Abrams was made Special Representative to Venezuela. In addition to the usual sanctions, American-based assets of Venezuela’s state oil company were seized and turned over to Guaido, who has recently arrived back in Venezuela. Overall, United States has committed to continue trying to solve the crisis peacefully.