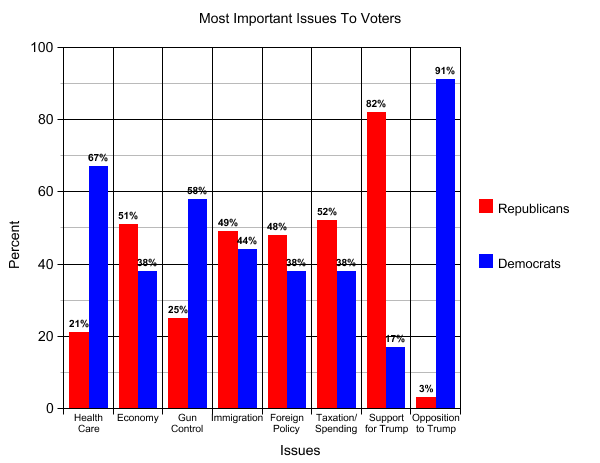 2018’ s midterm elections on November 6 are being billed as the most important in decades, or perhaps ever. Both parties have much to gain with this election, especially Democrats. If the Democrats gain control of the House and Senate, impeachment for President Trump will become a likely option. Many Democrats and some Republicans have been vocal about impeachment on the grounds of discoveries from Special Counsel Robert Mueller’s Russia investigation, most notably obstruction of justice.

To gain a majority, Democrats need 3 seats in the Senate and 24 in the House in order to have a majority in each. According to FiveThirtyEight, Democrats have a 7 in 9 chance of winning the House, and 1 in 5 chance of winning the Senate. However, the Republicans need 8 additional seats in the Senate for a filibuster-proof majority. Luckily for each party, there are many opportunities for gaining seats –– all House seats and 35 Senate seats are up for reelection. In the House, 44 Republicans aren’t running for reelection, causing many new Democrats to run in districts that have, in the past, been firmly held by incumbent Republicans. USA Today has attributed this to heightened partisanship within Congress and the splitting of the Republican party as a result of Trump’s election.

Many key issues for this election extend past political issues and policies. The largest topic dividing voters for the past two years is President Trump himself. Many people are taking a side solely for supporting or being against Trump, whose administration has been controversial since his election in November of 2016. FiveThirtyEight has Trump’s current approval rating at 41.8-percent, the lowest it has been recently, and his approval amongst women specifically is even lower at 30-percent. Both fierce critics and supporters of Trump have shown they’re ready to vote.  According to a recent Pew Research Center survey, there was a 56-percent increase in voter turnout in the 2018 primaries compared to past elections.

As for actual policy issues, immigration has replaced the economy as priority number one for most voters, as shown in a summer 2018 Gallup survey. The next largest issues are the economy and healthcare. Other important issues as of now include gun control, abortion, and recently the confirmation of Brett Kavanaugh to the Supreme Court.

Another massive issue for this election is the possibility of foreign interference. Russian disinformation campaigns on social media influencing results of the 2016 Presidential election have caused controversy around Trump, with the Mueller investigation still active. Key national security officials also have drawn attention to the possibility of foreign interference. NBC News reported that Director of National Intelligence (DNI) Dan Coats and National Security Agency (NSA) Director Paul Nakasone have both stated the U.S. government is taking action to counter Russian and other foreign influence. Additionally, National Security Advisor John Bolton issued a statement saying that there is evidence of ongoing Iranian, Chinese, and North Korean attempts to influence the 2018 Midterms.

Especially now, Democrats are trying hard to appeal to minorities, the LGBTQ+ community, and women with many of their new candidates being one or more of the three demographic groups. On the other hand, there are many new moderate Democrats running to appeal to the large group of anti-Trump Republicans pushed away due to fringe candidates and increased partisanship. The Washington Post reported that many former State Department, Armed Forces, and CIA officers are running as Democrats in an attempt to appeal to the veteran and national security-focused voters Republicans used to appeal to.